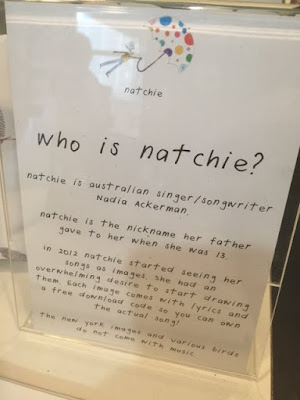 Over the weekend I met a gift of an artist as I was meandering through Brooklyn with a very kind, dear, talented, and spirited fellow artist. Every now and then you come into contact with an artist that seems to embody what it is to be an artist. By this I mean that the true artist just keeps stretching the boundaries and squeezing every nook and cranny out of their artistic journey. As I listened to her story of how she came to have this amazing store in Brooklyn, I was immediately impressed and humbled all at the same time. Her story was quite simple. She wanted to come to NYC from her native Sydney, Australia, to pursue her dream of becoming a jazz singer. To date has already sung with some very heavy and top level singers, such as Sting, Billy Joel, and James Taylor to name a few. I would say that she has had quite a career so far on this very competitive island.

What truly gave me pause, was that in 2012 Miss Nadia Ackerman, also known as "Natchie", decided that she would try her hand at drawing her music. That sentence alone sparks so many emotions for me personally. It sounds like such a complex, yet simple concept all at the same time. So imagine this, each drawing comes with a lyrics sheet and a download of the song that inspired that particular art piece. I love it! I met her face to face and her energy was just so real and inviting. I encourage you to take a look at her work as well as to listen to her music. I was sure to buy one cd before I left the store and I really enjoy it. You can find her art and music HERE . It was a serious treat to have just randomly walked into this magical world of art and music, and to now be even more inspired to set free all that my mind continues to produce almost daily.

Sometimes in life we are moved by a certain thing and our minds begin to work almost immediately. I was on the train today and I saw a piece of paper underneath a seat on the train. This was no ordinary piece of paper, I could feel it in my gut. So after about 3 stops of staring at it through the legs and shoes and what have you of about 20 to 40 people, I started to move in the direction of the paper. I was convinced at this point that is was foreign currency of some sort. I said excuse me to a man that was about 5 feet in front of me as I began to bend down and pick it up, but it was too late. The man that I said excuse me to was making his own descent under the seat to pick up this bill. As he lifted it from under the seat, I spoke up and said that I was just reaching for the same thing, but that he had gotten to it first. So his three friends and I had a small conversation about the intricacies on the bill and that it was from Singapore. One guy commented that it was probably worth about 25 cents in our money. Then a guy who caught a glimpse of it from his seat chimed in and said that it was worth about a dollar and fifty cents. Who dropped this bill and do they even know that they dropped it? Either way, I did not move right away when I saw it and I took it as yet another lesson from the universe about how we miss opportunities simply because we wait instead of moving with purpose. In this case, it was just foreign currency. On another day, it could be a huge situation that could change my life for the better. Who knows? Who ever really knows? So I didn't get to keep the 2 dollar bill from Singapore, it's not the end of the world. It was however a very teachable moment. Listen to your soul and go in that direction. There are no real roadblocks, only man made ones that can be broken down in an instant by choice. Game time.