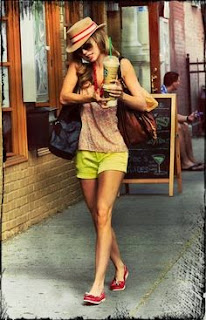 Somehow I am becoming a little bit more and more sensitive to the use of the cell phones in the streets of NYC. I use my phone as I walk, however, I pay very close attention to those around me and I am close to not walking and using my phone at all. I noticed something today that disturbed me and then I saw it again about 2 hours later again. Two people were walking towards each other and they almost hit each other head on. They were both men and one of them basically told the other one where he could go, if you know what I mean. The thing is that they were both looking down and they were both at fault. I watched it and though to myself imagine how many things you could run into if you are looking down for too long. I have not done this in a while. I am actually a bit concerned about what would happen if I walked right in front of a moving car or something of that sort. The second situation was almost identical in its bullet points. Except, this time it was a man and a woman.  The woman let him know that he should really watch where he was going. He decided to shoot her the bird in such a gentlemanly fashion. It was not family entertainment.

There is also the situation where the person to your left or right or in back of you is having a conversation that is being broadcast to the entire block. I usually just stop for a moment and let them pass. On the other hand, what do you do if they are talking so loud that it doesn't even matter that you let them pass? You cross the street and call it day, that's what. It's usually that guy who is fighting with his girl or that actor that is rehashing how his audition went today. I seem to attract these scenarios most often. I am actually entertained by the people who think that their life story should the center of attraction on that street. I like it because most people want to walk on by or ignore it, but they can't. Just a few days ago, I sat 5 feet from a woman that was giving a run down about how the black man was lazy and how she will not let him in anymore. What made it so riveting, was that I thought she was speaking on a headphone mic because she was seemingly asking and answering questions. As I walked away, I looked over at her and she did not have anything attached to her ear at all! She had brilliantly staged a one woman drama with all the bells and whistles and it was worthy of Oscar praise. I love this town.

So can you can you remember when there were no Starbucks anywhere? I can briefly recall it, but it's foggy. I can however, remember the guy who told me to invest in this little start up that will be huge in a bout 5 to 8 years. I did not listen to him at all. I was wrapped up in a 20 something year young awesome life as a singer on a cruise ship. Investing and saving was more than far from my brain during this time. He was right and it would have changed my finances in a huge way. I cannot look back and be upset though. All that has happened is just as it should be.

Today at about 8am, I saw a Starbucks line that was literally out of the door and about 7 feet long from the main door. Now, as I saw this, I was amazed. Firstly, coffee is something that a New Yorker never has to wait for on any day. Unless of course, you only want Starbucks. In this case, you will wait and you will eventually get it. Trust me when I tell you that this town pretty much runs on Starbucks. I actually like the atmosphere in a Starbucks. I know that the reason people gravitate to Starbucks has very little to do with the coffee. Starbucks is an experience, a resting place, a haven to surf the net, and lastly, a place to meet. They even sell sandwiches, cookies, candy, mugs, and even music. They have more than diversified and they seem to not be able to stop.

I read a David Bach book called The Automatic Millionaire and it went in on how much people spend on their Starbucks coffee on average and it floored me. I am in Starbucks only maybe twice a month, so I got away easy. Basically , if you have 2 Starbucks coffees a day, it translates into some staggering numbers. That's about $126 a month, or $1533 in a full calendar year. You don't even want to know the figure over 30 years. These stats are so riveting to me.

In short, Starbucks has created a culture that is whipped beyond belief. I love to watch it simply because I love to see people who are passionate about something . I have been watching this brand for years. You cannot knock it and it will go on with or without us. It's not to be messed with on any level. That was a page full was it not? Facts make me happy. I hope you got a little something out of this. Flow like water. Peace
Chase

Email Post
Labels: cellphone use coffee addicts consumption of coffee David Bach Starbucks coffee talking on a cell in the streets the brand of Starbucks the cost of coffee