He Had No Idea

Today was a humbling day for so many reasons. As you probably know by now, I love children. I love their curiosity, their boldness, their naive nature, their innocence. I am mentoring an 8 year young boy that I have developed a special relationship with over the past 3 or so months. I teach him guitar and I tutor him in reading as well. This young blood is full of energy and he does not let a minute go by without reminding you of this. Trust me, not a minute. I met him at school today and we took a stroll through the park. I am game to go into Central Park on any day of the week for any reason at any time. It is one of the only places the world that makes me happy by just stepping into it. Anything that is happening inside of it is just extra bliss.

He walked in with a cup of flavored ice that I bought for him after school. His lips were as red as a country apple and he could not be happier. We spoke  about baseball and the files that were to our right. We also spoke about the fact that he used to have a baseball glove and that he lost it. We inevitably wind up play fighting at some point while I am with him. Funny how one game of Mortal Combat can segue into many bouts of play fighting from that point on. The games just never end and it's a serious thing. This kid has 3 circuses going through his head and on top of that he is the ringleader of a carnival. I hope that brings the point home clearly. He is a freight train constantly on the road to his destination. He keeps me on my toes. 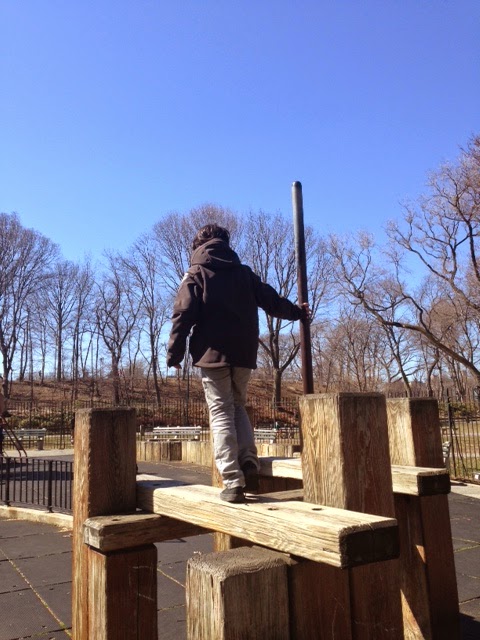 We stopped by a small park on the way to the library as per his request. I could not say no as much as I wanted to get to work. So I told him that he had 30 minutes flat. I sat and watched him immediately with into play mode to the tenth power. This means that he jumped up on a set of wooden beams and ran across them at rocket speed, he then jumped into a tire that was hanging from another wood beam, I spun him around and he begged for more speed and more circular motion. I told him to be careful so as not to be dizzy. He got dizzy shortly afterwards and loved every minute of it. I took a few shots of him with my phone, I could not resist.

The best part of being in the park with him was the interaction with some other boys. I loved the diversity of their nationalities. There was a black boy, a Russian boy, a white boy, and a Spanish boy. My wonder boy is of Latin descent. I watched them kicking a ball and he wanted so bad to join them. I told him to introduce himself and see if he can play with them. He was not excited by that idea, so I walked up with him and asked. Now, one kid said sure., The other kid said no in a way that had no hesitation at all. Children can be very blunt at times. It worked out though. He became the goalie. The problem was, he had to be the goalie on both sides. There were already 4 boys playing before we got there. This did not last for long. They became frustrated with his inability to run back and forth to each goal. I felt for him, but he had a great time while it lasted. What I loved most about this was that they did play together for a about 10 minutes and they were serious about it too. They got on with it. End of story. There was no race blockage or conversation about if he knew how to play. They just took a chance.

We finally made it to the library and got down to business. WE read some stories from an up coming test, and I graded him on his answers. His Achilles heel is his inability to slow down while solving a problem or giving the right answer to a question. He wants to solve all problems with maximum speed and move on. This causes so many issues. We checked out 3 books for him on the way out and then we were gone. This whole afternoon was a challenging journey.

He had no idea today how much I was studying his every move. How he answered my questions. How he lit up when the boys allowed him to join in with them. How happy he was to hold this flavored ice in his hands as he left school. He did not see me smile as he ran with his back towards me on this wooden beams. I love how he attacked his play time as if it was water slipping through his parted hands. Theses why I love children so much. Even throwing away the paper that the use was in with the napkin was fun to him. It was also funny how when he threw it in the air in the direction of the can, it blew off to the side. I asked him nicely to pick it up and place it n properly, and he did.

I thought about how I must have been when I was 8. Was I running up and down and bouncing off the walls wherever I went? I am going to say that my mom most likely did not allow that. So I let him spread his wings and push it all out. I knew that he would get tired, and so he did. I was reminded today that being a child is a bit messy. There is no road map at all. Much like being an adult right? Play is always important to a child, there are no exceptions. Most of all, the magic in today was that I watched him be happy and free and that is worth so much to me. It's a massage to my eyes and heart at the same time. He trusts me to guide him and that is worth everything to me.One day I will show him this posting and he will smile. Peace

Chase
Email Post
Labels: being a kid learning from children mentoring children observing children playing in the park trust from a chid tutoring a child