In Praise Of The Boldness Of One 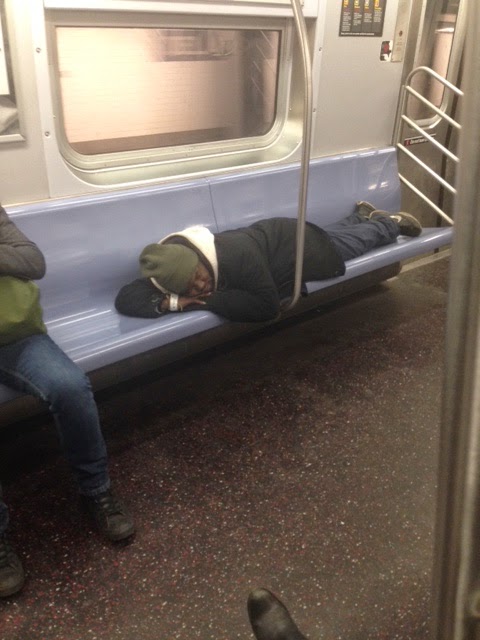 I walked onto the train tonight and I saw this guy laying across the seats. He took up at least 4 seats and the train was full of people that could have sat down. I smiled so big when I saw him and I had to take a picture. Actually I took 3 pictures, but that's not relevant I guess. It was just great o watch how his choice of lounging affected others. Some smiled, some made ugly face, some make comments under their breath. I loved it so much that i could not handle it. This guy could not care less and it showed. He was sleeping, I thought. But then he changed his position and open and closed his eyes and then rolled over again. Each stop, a new batch of people rendered their opinions with only their faces and it was pure entertainment for me. This was a volume of lessons all wrapped up in one train ride.

This guy just did what he wanted to do. There was no care of what people would say or if anyone was being inconvenienced at all. I see this as a way for things to get done in a very powerful way. I don't condone disrespecting people, I just know that the gold usually belongs to the bold and adventurous. I mean 60 people must have looked at this guy in about 30 minutes. The interesting thing was, not one person challenged him at all. I though at least one person would ask him to move or tell him to move, since we are in NYC. However, nothing of the sort happened. I compare this to so many other bold moves by trailblazers on this life. There will always be a person that goes in the complete opposite direction and is not afraid to go alone with not even one follower. Does that make them crazy?Does that make them wrong? It does not make them wrong at all. They are following through with their own plan and I respect that.

I have seen other guys laying down on the train, but for some reason, this one was different. It was his comfort and nonchalant vibe that got me. I just could not stop thinking about what I could do if I just acted 20 percent bolder and just pushed some things into action. It truly got me thinking.A guy on the subway just lying across the seats. It seems so simple, but there was something else there. I would not be writing this if it was not profound in some way. Also, it was the fact that people just stared at him the entire ride. What was going through their minds? 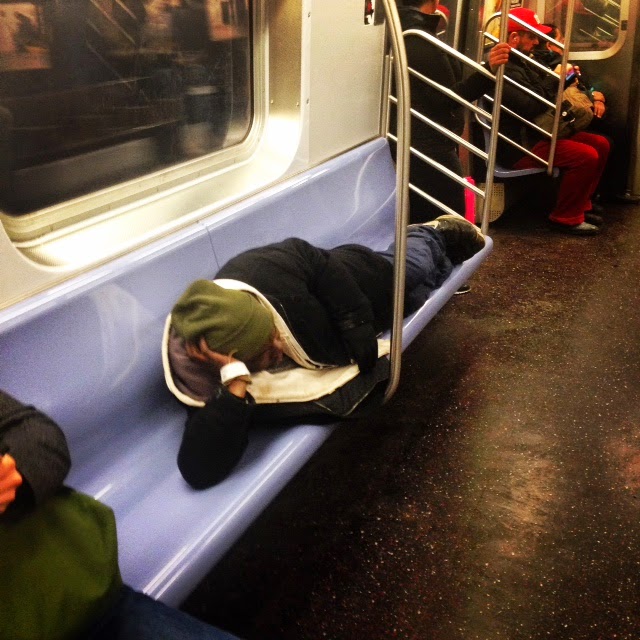 All of this is food for thought. On the other hand, it could mean absolutely nothing to you. Many things just make me think. This whole scene told me so much about people. Some I knew, and some just gave birth in the moment. Human beings are complex, yet they are full of expected behavior as well. Again I will say, that not one person challenged this person. Would this have been different during rush hour? Who knows for sure? Would you have pushed on this person or attempted to move him over? What happened is in the past now of course. I just love to ponder the possibilities. Oh, on a side note, he didn't seem drunk or homeless. He was just tired and acting on his own old terms.

Chase
Email Post
Labels: adventurous Doing what you want to do lessons from the simple lying down on the train NYC train people on the train trailblazers