The Scent Of A Game Changer If there is one constant rule about NYC, its that there are none. I can say for certain that people have become successful her in so many random ways that it just disrupts my brain.In the best way of course. Whatever you can imagine, you can do it here if you do not give up. I have been focusing on my next move recently move than I have ever done on the past. Those who have already done it in their chosen paths seem to be following me like a shadow as well.As the saying goes, the moment you pay attention to something, you start seeing it everywhere.

We are surely living in a time that more and more people are owning their own businesses and the information for the average person to do so is everywhere. The problem is, the world doesn't need any more "average". I had an average interaction today that made me leave the place that I was about to spend money in and I just chose not to accept it and leave. So needless to say, that kind of interaction could not possibly attract lots of people to keep coming back. To be clear, yet concise, I had an interaction with a person that may as well have told me that they didn't care about me, or if I was happy or not while I was in their establishment. This is the opposite of a game changer, obviously.

Now on to the exciting stuff. I was invited to the studio of a very special artist that I had heard of a couple of times before. My dear Aunt purchased a gift for me from this artist that had my very own words engraved on it. This itself is really special. I was so excited inside when I entered this private loft space and saw the creations from this talented artist. I was greeted by her assistant who was just so completely in the perfect role to represent this very eclectic woman. We spoke and he showed me around the hole place before presenting me with my gift. The minimalistic quality of this place was just magnificent. A fig plant was in the corner, glass display cases were all over, and the furniture and other curiously strange and unique items were all around. I felt right at home.

This woman has changed the game because she was doing it her way on every level. No cookie cutter salesperson or revolving door of just any client walking in off the street.She catered to those who either felt her message or wanted to display their own through one of her pieces. This method of operating keeps everything so pure and organic. I could feel that she did not settle with any of her pieces. Each thing that she made had a special meaning and nothing was just made for shock value. One of my first indications that a game changer in the midst, is that you can feel them even when they are not in the room. I was unable to meet her when I picked up my ring, however, I will go back and meet her before the year is done. 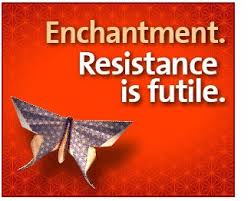 I am also just finishing a book by Guy Kawasaki called Enchantment: The Art Of Changing Hearts, Minds, And Actions . This book is truly amazing in so many ways. There are clearly so many books that delve into this topic. However, this guy goes in deep and he means business. I don't want the book to end, but it must in 2 chapters. You can really smell a game changer from a mile away, in my opinion. I wanted to make reference to Guy because he makes sense and he is very direct, intelligent, and most of all light hearted about being successful by making a difference.

If you are curious about the artist that I spoke so highly of, her name is Aurora Lopez Mejia. I highly recommend that you find her creations and take a close look at them. I had to expose these two people who do completely different things for exactly the same reasons. They only know how to act from the inside. Anything that induces a reaction in a fake, cardboard way, they are not interested in at all. They promote moving forward by listening to your own voice despite where everyone is going in droves. At this very moment in time, Are you following the crowd or creating your own path? Just asking to see what comes up for you? Either way, be happy doing it or stop it now.Be well.

Chase
Email Post
Labels: Aurora Lopez Mejia Enchantment game changers Guy Kawasaki pay attention stepping out of the crowd the average person those who do not follow the path