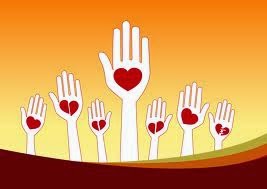 I love watching interactions between people on any level. Today I was at a cooperative in Brooklyn, NY. This is a place that I go one a month for 2 hours and 45 minutes to give my manual labor in exchange for the freshest, healthiest, and most local food in the land. I have no idea why I wrote land, instead of city or country. Anyway, I was doing some work in a different part of the building today. I was downstairs in the basement being a "turner". This means that I make sure that the products that come down on the belt make the turn off of the belt and up to another belt. From there, they are stocked and make their way back upstairs into the coop. It's a mindless task, however, the people that I spent my time with which doing it were worth it. I spent most of the time talking with a Jamaican guy and a Scottish guy. You can imagine the difference in accents as well as their points of view.

If there is one thing that makes me happy is speaking with people who see, think, and do things differently. I complimented the Scottish guy on his accent, as I had a few times in the past. The Jamaican guy is truly a unique character as well. He has this voice that is a bit high and direct. Actually, his voice has many levels, he just uses so much expression to communicate. I got to meet his two children about a week ago and they were so beautiful. I just found out today, that I actually know his wife from yoga. I had no idea that she was married to my friend. It's a small world after all.He had asked me to help him move a week before and I said yes, however, I could not make it. Today he thanked me for saying yes, even though, I could not make it. He told me that not one person showed up and he had to do it all alone. I was surprised, yet and still he acknowledged me.

The Scottish guy was just full of joy in his own way. What an accent! It just rolls off his tongue like hot butter off of corn on the cob. He told me that he had worked with a great company that I love prior to the coop. This made me happy and he just had a great attitude. I could tell that he took pride in what he does and that he was appreciative of what was doing for him as well. In a word, he was kind. He even made a joke at one point when I didn't send a particular item the right way off of the belt that I was letting him down after he told me in such detail how to sort the product. He was being sarcastic and playful of course, but it was refreshing to feel that vibe.

I did go back up to the main floor after I was finished and do a little shopping. There I ran into a nice woman who I always speak to the day of my shift. She and I witnessed a man that came into he aisle that we were standing in and asked her a question. He was looking for something that he could not find and he was a bit irritated by it. I paid close attention to how she smiled and diffused his " I am so entitled" vibe. She then told me in so many words that some people reliving in their own world far from any kind of reality. So we need to smile at them and show them that life is not that serious. I agreed with her. I knew that we can only be responsible for our own atmosphere and that is it.

Lastly, a woman that always works the same shift that I do, saw me and commented that she was wondering where I was earlier and how come she didn't see me like she normally did. She actually said that it was quieter!! Ha! She did not like it though. I told her that I was downstairs the whole time. I gave her a hug and  we chatted about some things that she had coming up. She teaches yoga and is a very warm spirit to say the very least. These interactions made and impression on me today. I know they did because I am working about them many hours after the fact.

I ran into a few unkind people today as well. I didn't stay too long in their space though. It's amazing how we can feel an other's aura and immediately want to change direction. I left no ill feelings with them, I just chose not to occupy the space with them any longer than I had to. I forgot. I had to take a short cab ride home today and the driver was really nice. I asked him about driving the cab and how he liked it. His response was great and he seemed to really care about his livelihood. At the end of the trip, I am supposed to rate him as a driver. He politely asked me to give him 5 stars as he was about to give 5 stars to me. This car company allows you to rate each trip on your cell phone after you leave the cab. My trip was fast and cheap. His kindness was priceless. It's been a great day.

Chase
Email Post
Labels: being kind food coop Kindness respect for others small interactions wisdom from others working together working with a good attitude