Welcome back to me! That is what I heard as I sat down to write this posting. So much is going on and I am taking it all on head first. I am still such a glutton for watching how people show up in my life on many levels. One day I am just navigating through the day alone snapping pictures or listening to music. The next day I am in a five star hotel speaking to a man that is highly influential and worth over a trillion dollars. That was not a typo, he really was worth that much. That story will come at a later time. In the end, we are all people and that is that. No amount of money gives us more access into anothers true heart. That's my story and I am sticking to it.

So about a week ago I was reading the latest issue of Yoga Journal. I love this magazine and it is truly a ray of light in my life. Each issue has pictures and stories that are enlightening, moving, sensible, and most importantly, useful to all. In this past issue, I was moved by a particular Yogi named Sarita Louise Moore. She is a dancer, choreographer, and yoga teacher bases in NYC. There was something about her energy that leaped off of the page and into my system. I read her story by going online and doing about 5 minutes of investigating. Mind you, she was just a model in the magazine on a spread about Bharadvajasana. That word simply means pose or asana. I was taken by the life force that was present in her face and traveling through her body. One might say that this sounds a bit strange to feel this from a magazine page, however, this was real.

That day as I was reading this article, I was making my way into the city. Actually, I had seen this spread and researched her,all on the train. Technology is fascinating, is it not? My mind told me that I had to meet her and tell her that her aura is huge and that I support what she is doing. Come to find out that she is starting a new television series called For The Love Of Dance . This will be a show that shows people all over the world what its like to be a dancer in NYC on many levels. So That day I was running some errands in the city on the Upper West Side and I was feeling great. I had put that out of my mind at least for the moment. I finished what i had to do and decided to take a stroll around Columbus Circle. I then decided to just sit there and eat some butternut squash and people watch. I also had my camera with me, so I took some pictures as well. I decided to just put a few shots on My Instagram. I wound up taking a cool picture of a deaf dog named Mooshoo that had orange boots on, but I digress. 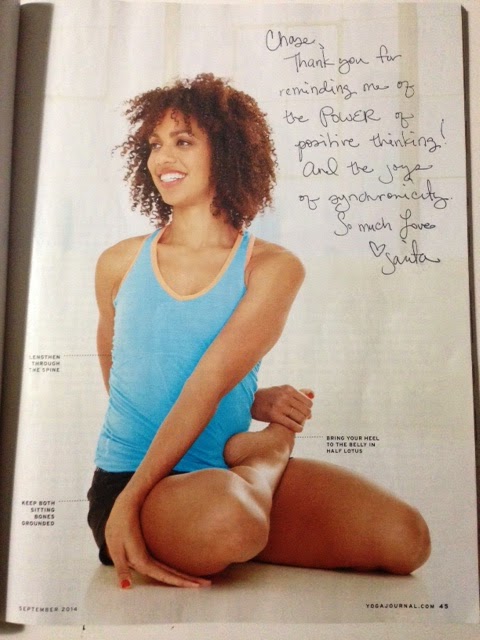 About 15 minutes had passed and I was looking down at my food eating. When I looked up to my surprise there she was! Surita from the magazine was surrounded by a small film crew and they were getting shots for her show. At first, I must admit, it was just too good to be true. So I had to follow   through with my plan to tell her what I thought. I walked over to her calmly and tapped her on the back. I introduced myself to her and told her the story from the beginning. She was gracious and polite and very warm. She told me that she really needed to hear this story today because she had some business things on her mind that she was working on manifesting as well. We were like old friends immediately. Her crew asked me if they could use this story for he show, I agreed happily. I believe they filmed the whole interaction. Surita then told me that she was about to go to Kenya to reunite with her boyfriend and that she was really excited for that as well. She then wrote in my magazine and then we took a couple of pictures together after exchanging cards. Now that is quick manifestation and I am sure it was not even close to a coincidence. 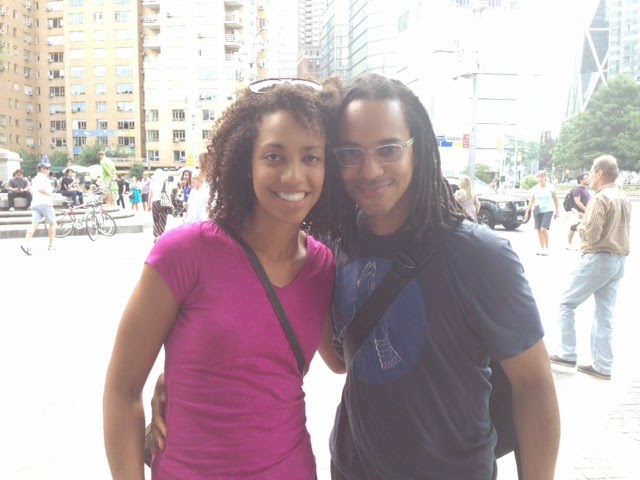 Now I have spoken many times in the past about how we treat others. It is something that I speak about quite often. I had a day last week when the importance of friendly engagement was just so powerful and moving, that I had to share it with you all. The first situation happened in a well known restaurant here in NYC. There is a place named Hillstone that has possibly the best veggie burger in all of New York. I tend to go there after my yoga class and it is always an experience. I am going to make this a short story. I had the best service the first two times that I came in to this place. The waitresses that were at the bar were top notch and they treated me like family right away. So the first two times I ordered the veggie burger and a side of broccolini, with avocado on top, no cheese, and a fresh squeezed lemonade.  The third time I had a new waitress, however, the prior waitress was there training her. She came over to say hello to me and called me by name. I was so moved by this. Then she asked me if I remembered her name, and I did.We then gave each other a high five. She told me that she came over because she wanted to make sure that the order was put in correctly. She noticed that I did not order avocado or no cheese like the last time. This was over 2 weeks ago. I told her that she was right and that she could put it in the same way this time. I had also asked the new girl a few seconds earlier if she could give me half broccolini and half corn as a side. She told me that it had to be one or the other as per the chefs instructions with no exceptions.

Now this story has made it onto this blog for one reason and one reason only. When we engage with each other even on a small level, it lightens life up for both sides. It has been proven to me time and time again. I did not ask her to remember me. She did because I engaged her and we had small talk about the place and the veggie burger and people who forget their chargers and even the live jazz that was playing. My glass was never empty the entire time. When the food came, it was like a picture out of a magazine. Everything looked perfect. Just as a side note, there were 2 plates in front of me. One had the veggie burger and avocado. One had the broccolini, and one had this delicious corn. I asked her how I got the 2 sides? She replied,"Oh, we just did that for you. The tip increased each time and a bond was made. They were really on their game and it was for real.

I am particularly inspired right now for many reasons. I plan to ramp up this blog by bringing my daily quotes here and to do some up close and personal interviews as well. I can never get tired of telling you all how much I appreciate you being here from across the world. Know that it means the world to me. The best is still yet to come!!! Thank you