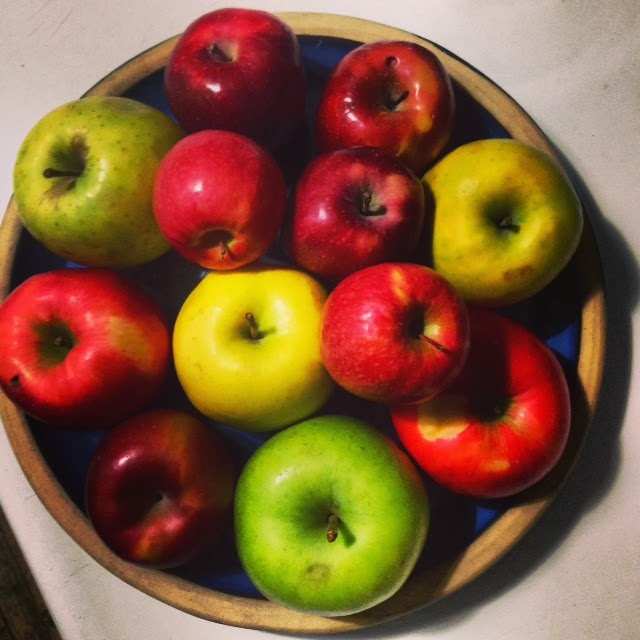 So here is the straight truth. I started this project without a lot of preparation. Guess what I forgot? BUYING THE APPLES!!!
So I went to buy the first bunch today and I gave them a little artistic spruce up above. This is going to be a fun project, not just because of the health benefits. I love apples anyway, but there is something about doing anything everyday that truly does excite me. Patterns develop and usually that produce massive feedback and sometimes even clarity.

I purchased Mutsu, Red Delicious, Fiji, Honey Crisp, and Pink Lady apples. They will last me for at least 12 days and then I will reload again. What will it do for me? How will I be different? Will anyone notice? Will it spark some new thoughts or actions? We will see.

I had a very strong and enlightening conversation with a dear friend the other day. This happened yesterday actually. She is an intelligent woman with so much going on in her life. Actually she has had many things happen in her life that have brought her to this space in the present. Not unlike us all right? We spoke for at least an hour and it was such a moving conversation. I say this because at one point she even shed a few tears and that's when I knew that me being there was perfect timing. Please do not get me wrong though, the magic came from her in my opinion. I was merely a sounding board and an oasis of sorts. I showed up with no special tricks or panaceas in my pockets, just an open ear and my heart.

It's so fascinating when you show up thinking that you are about to help someone in need and you leave realizing that they helped you as well. She spoke of growth and how she does not know how she will progress in her current field of interest. Truthfully though, I knew that her current field was just a buffer to keep her from her real passion, writing. So I did what any other caring soul would do in my position, I told her to rip the band-aid off and start sharing her story. It was not surprising that she had some trepidation about exposing her truth either. We have all been through this and it always seems justifiable in the beginning. However, ultimately, it robs us of our wings.Being as I am in a similar process right now with my music, I had some readily available advice and I shot it out of my system like a football out of Dan Marino's hands back in the 80's.

I had made up my mind that I was going to flood her with about 15 resources that would add a little bit of high octane rocket fuel into her tank before I left her place. She took notes and I was certain that I had made a difference. The magic came when she was explaining about how the protocol in salsa dancing was for the female to never lead. This hit me hard. It just made me think of how some people have parlayed this into their everyday lives. They feel that they are supposed to be behind the eight ball and be in debt, single, or without the ability to make mindful choices. They own their poverty, broken hearts, disappointments, and limited belief in themselves, and wear them proudly on the front of their jerseys with neon signs!

Life is so interesting. She didn't uncover something completely new for me as much as she delivered the message in a context that made me adjust my thinking a little bit. I left with a slightly different perspective and some more desire to really rise up higher. I told her that someone, somewhere is waiting for her story. Someone is just wishing to connect with just one person who is struggling or has struggled like them in the past. There was this imaginary valve that seemed to have been released as I walked out and she thanked me ever so graciously. She even called later on and thanked me again in a message. The point of all of this is, what we say matters to others no matter what we think. The other side of the coin is that what we do matters as well. Sometimes people just need to know that they show up on the radar. How we listen to others is just as important as what we say back to them.

It's the end of the week and I am charged for whats to come. There is so much massive change coming towards me this year, I can feel it. I am summoning a higher level for myself and doing the mental sit ups in the meantime. I wish I could truly describe how I feel in detail, but words would never do. I ate an apple in the time that it took me to write this post. I am on my way!!!!