Love Among The Redwoods / Deborah And Noor (Part 1) 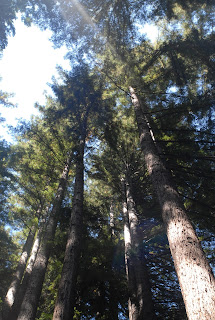 Let me begin by saying that the impetus for this posting was one of the most emotional ceremonies that I have ever attended in my entire life. This is a huge statement to say the very least. I have performed at over 300 weddings or so in the past 10 years easily. This is probably a low number because I do not have the actual count. I will give you a bit of the back story first. 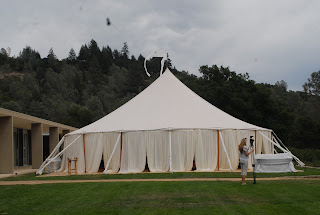 I was flown to the other side of the continent with 11 other people to do what I love the most on this earth, entertain people. I arrived in Napa Valley, California on a Friday evening, and performed high atop the breathtaking Napa Valley vineyards the following evening. The residence was at least 2 miles above the street level. This was no ordinary residence. It was something right out of Architectural Digest and it made my mind stand at attention. There were about 150 or so guests and they were so happy and elegant and festive. I took several pictures and I could not stop staring at the gorgeous view that became more beautiful as the sun went down. This trip was a gift that I am still so very grateful for to this day. This was about 3 weeks ago, by the way. What a tremendous 2 day blessing all expense paid excursion that was! But guess what? That was still not the highest point of my journey. 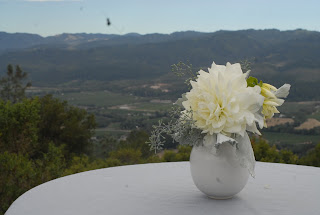 I have a friend that I cherish so immensely that lives in California and I reached out to tell her that I would be in town, albeit, not so close to where she lived. She suggested possibly coming out to me, however, time and distance were not on our sides at all. So on Sunday, when I was on my way back to the airport, I tried to get her to meet me at the airport, but once again, she was not able. Now I was at the airport and about to get my boarding pass and she and I spoke. She suggested that I miss my flight and take the later one so that I could come to a little gathering in the middle of The Redwoods. I could see no reason why this would not be fun, so I inquired about the cost to change my flight. To my delight, it was only $50. The universe was acting in my favor and guiding me to this unique affair and I just went with the flow.

My friend picked me up from the airport and we proceeded to drive about 1 hour and a half or so to an event that I will never forget as long as I live. She explained to me that these two people had decided to exchange vows and make their union official within the soft blanket of the wilderness below the tallest Redwood trees amongst their closest friends. This alone was so intriguing to me that I could not wait to see these people and all the love that I was sure they would emit. Somehow my gut told me to get ready to have my heart and soul stretched to its capacity. Our conversation on the way was so easy and refreshing. What a gorgeous soul my good friend is and how easily she hosted me as if we had just seen each other yesterday. I had not seen her in 5 years I believe. The power of a solid friend is truly bullet proof.

Picture this scene for on moment. There are about 50 people or less gathered around this area in the middle of these beautiful and tall trees that carry their own beauty without a doubt. I cannot describe it in a way that does it the appropriate amount of justice. I can say though, that love permeated the air around us and not a soul that was present was immune to this emotion. Now remember, I did not know either one of these people. Interestingly enough though, once I was in their presence, I became completely inundated with their love and commitment to one another. I took a few pictures and then a few more and then the guests probably thought that I was hired to take pictures!!!Here are a couple of shots from the event.

.
This couple wrote their own vows and they wrote them in such and open and vulnerable way that is resonated with me much further than I had intended it to. Wait a minute, I didn't even know I was going to this event!!I think you understand what I mean though. I will post a second blog that will let you know what I wrote on my noted during the ceremony. That's right!!!! Notes at a wedding ceremony!!?It's like I was in a class on how to sustain a loving and powerful union that will last forever!! That is certainly what it seemed like anyhow. The best part about it though, was that it was such a pleasure and that it really made so much sense that these two people had found one another.

The ceremony was filled with music as well. There was a lovely woman who sang a song so beautiful and she was just the nicest woman as well. I complimented her on her voice, as we are both vocalists. There were some acoustic instruments being played and even a little bit of dancing that poured out from some of the guests. There was a poet and there were even some children that made their presence known of course. The picture above with the red fabric hanging from the middle of the wood structure was just incredible. It was a symbol of their union and I believe that it was made by Noor himself.

So after leaving this particular part of the grounds, we relocated nearby to listen to a live band and dance and it was just perfect. The weather was great, the food was delicious, and the people were just so elevated. I could not stay for long because I had to catch my flight, however, I was truly honored. 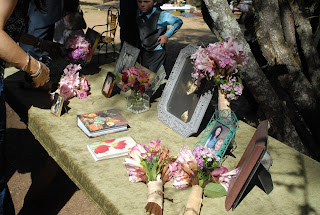 We just don't know where the lessons of love will come from. Sometimes they come when we are in action and other times when we are just observing. I will keep in touch with this couple and I will send them the many pictures that I took. What a profound experience that was in every way. They made me feel at home and they thanked me for being a part of their special day. What more could I ask for after that? Just another reminder, this was only part one of this posting. I have to post the notes that I jotted down. It is so worth sharing the gems that they offered to everyone through the reciting of their vows.