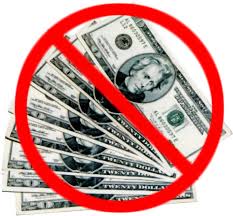 I live in one of the most competitive and cut throat cities in the world as it relates to the entertainment business. On any given day, thousands of hopefuls arrive to this incredibly stimulating island in order to bite into their piece of the pie. I have heard a lifetime of stories of failure as well as success and each one of them is quite interesting to say the very least. I truly love the depths that people will go to for a chance at being on the Broadway stage or even a facsimile of it for even a short period of time. There is a certain give and take that happens when you achieve it that cannot be explained, it can only be felt.

I look through the auditions quite frequently and I consistently see two words paired up that stop me in my tracks each and every time, "no pay."On the surface it seems a bit harsh and unjust, but then as I give it more thought, I realize that it is a form of paying your dues. I have paid my dues in a large fashion, however, the journey to a comfortable place as an actor, singer, dancer, is never over. I really am not aspiring to be comfortable artistically, I am striving to keep getting more and more well versed at my craft on many levels.

From time to time, I will get a call to do what I love to do more than anything else for free. I would say 90% of the time I decline. The powerful thing about that is, I was not always like that. I have progressed and I feel it more than ever right now. I have been on stage since I was about 12 or so. I remember when I could not say yes quick enough after someone asked me to sing or dance at an event or a showcase or what have you. However, I now realize how valuable what I do is, and I do not take it for granted at all. Just the other night, I was at a very exclusive venue singing for a wedding and the guests were flying as high as a kite by the end of the night because of the efforts of 10 other people and myself. It was a powerful and very rewarding feeling. I was paid to do what I loved to do and the people were more than happy after I did it. What a perfect combination.

From time to time, I come across people that are doing what I am doing and they make it clear to me that they do not feel that they are worth the money that they are getting paid to do what they do. I say this because they complain about so many external things despite the fact that they are making very little money to do what they do. What a dangerous combination. A mentor that I follow mentioned once that if you are not making that much money in your current job or place of business, its probably because you are nor worth enough to your employer. In other words, get more skills and you will command more money. That hit me like a brick at a construction site and I knew that it was true.

So back to my original point. Those who accept work for no pay are saying a combination of many things. So me are admitting that they are not as skilled yet and that they would love to get some hard core experience. Some are saying that they will take it because they know that this situation could not possibly ask but so much of them and that they are guaranteed an easy ride. Not likely. Some are even saying that they don't want to set their bar any higher because it would challenge their current perceptions of their abilities. I find it fascinating how different a human being works when nothing is at stake versus when everything is at stake. Starting a business with $150 is astronomically different than starting one with 150 thousand.

Do you believe  that you can get something for nothing? Can you become a champion by not exerting any effort? Can you get maximum effort from a person without them having a burning desire to reach their mark? I ask you these questions because, there are several "no pay" auditions right now in the current publications here in NYC. They would not be there if people were not calling them or showing up to take them. So what are they hoping for? Are they hoping that great people will work hard just because? Or are they using this tactic to their advantage because they know either way, the collective effort exerted even on a mediocre level can also produce results? Just something to ponder.

I say no way to no pay. However, on the other hand, my perspective about having a burning desire to reach a certain mark still stands. If the payoff is huge, I would do something for free. If it changed the life of another so profoundly, I would do it. If it changed my inside outside or outside for the better in a colossal way, I would do it. If I were somehow able to inject a new paradigm into another human soul that gave them a new outlook on life, I would do it. The interesting thing, is that some of these people who work for free on any level, not just entertainment, wind up doing just that. Think of the subway musician. He or she doesn't always get paid. They may go days without making any money and then BAM!!! They make enough to eat or to fulfill their pressing responsibilities. The bottom line is that a huge payoff can come from many different directions. Sometimes the payoff is in the liftoff. Starting something new, getting a new challenge, or being taking to our limits without our permission. So for some, no pay could possibly be the way. They will pay coming or going in the end right?

Claim your worth, claim your desire, dig in, and make it count.