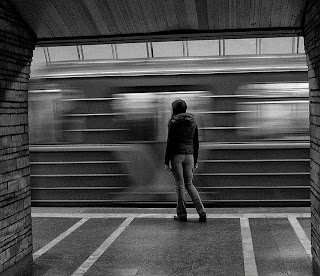 In the past few weeks, many things around me have not gone as planned. From meetings with people who did not show to people who were very late, and on and on. In these spaces, I chose to watch my mind very closely. What was I feeling? What could I do? Where would I go next? Should I call them? Why did they not call me? The list could go on forever? Its normal for us to ask any of these questions, is it not? In the past I have actually been calm during these times, however, some of the times, my whole energy changed from the inside and it remained that way until I decided to go in a different direction.

I was on the train yesterday and there was a woman who was so vocal about the train being slow that she disturbed an entire station of people. She was speaking to herself and spouting many colorful expletives that you could hear a mile away. Then when she entered the train, it sounded like it was 20 times louder based on the close proximity. People moved and made faces and some even asked her to shut up, welcome to NY. The thing was though, it was such a great example of what happens when we let something take control of us. So I thought to myself, when we get upset that so and so was late and so and so did not call and so and so did not do what is right, we lose every time. I have done all of those and I can never retrieve those minutes back no matter what I do.

Nowadays I do one simple thing, I watch my mind. This does not guarantee success every time, it just gives you a much better chance at remaining calm in even the most seemingly uncontrollable moments. A few day ago, I had an appointment with a a person, music related. I waited in their front room for about 45 minutes after the scheduled time. Then after all of that time, the secretary came out and asked me to call him again and reschedule. Now you can probably guess what I was feeling. I calmly asked her if I could just wait a little longer so that the trip would not be wasted. She did not go with that suggestion and I walked out. When someone does not value your time, it does not leave a great impression. Things happen, so I still do not know what actually happened that day, however, as the saying goes, you only get one chance to leave and impression.

So I have been having fun with this just for the simple reason that I am just watching my choices extremely close. This little exercise is a mind blower. Some of you are probably thinking, but I do watch my mind!! If I could place a video camera incognito on some of you, I guarantee you would beg me to shut it off during the viewing. I am writing this right now and feeling the power within myself just knowing that my mind is reading these words and holding itself accountable.

When we plan and things go sideways, its so very normal that its scary. In other words, I have found that almost every thing goes differently than you think it does. The up side is that we get to choose how we see the whole enchilada. Who knows what is good and what is bad? Who knows what is wealthy and what is poor? Who knows what living, truly living is? The answer is, you do. Not me, but you. When my plans failed, the person was late, I missed a train, or I didn't have enough money to pay a bill at any point in my life, I made it. The frame moved on and I had another chance to make another decision very shortly afterwards. I always travel with my camera or a book or both. So if I have to wait for anyone at any time, I stay calm. There are so many pockets of time that we do nothing with and then later on we complain that there is no time to do anything. Use the time like precious gold when things don't go your way and watch what happens. Onward.