A Project On Happiness? / She Is Happy 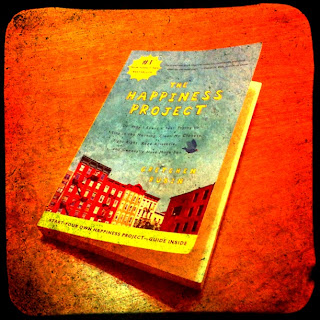 I can honestly say that the word "happiness" is one of my all time favorite words. You can't even say it without some of the words power dripping out on you in one way or another. So recently I began reading a book that I have wanted to read for at least 3 years now. The name of the book is The Happiness Project

by Gretchen Rubin. Just the title alone had me at first glance. I wondered what this woman was writing about and how would it affect me when I read it being as i have such a fascination with this topic. Well, I have just gotten around to getting the book and I am about 100 pages into it and I really love it. It is her own journey into taking control of her own happiness in her life overall. The lessons in it can be helpful to any living person and that is what I love about it. I have underlined and starred so much of the book already that it is truly amazing. I will be emailing her or reaching out in person to thank her as she is a New Yorker like myself. I have really learned so much from the book already. One thing that stuck out was that in one study, people assigned to give five hugs each day for a month, aiming to hug as many people as they could, became happier. That made me smile. Please pick up this book and have it just to refer to it from time to time. What a gem.

So I was on the train today and as I sat in my seat I became fixated with a young girl and her mother sitting about 5 feet in front of my on the opposite side of the train. This young woman was obviously mentally challenged, yet she was singing and moving back and forth and just higher than a kite. High minus any controlled substances that is, just to be clear. So I was reading my book on happiness and every few seconds I would shoot her a quick glance. She was mimicking the sound of the closing doors every time that the train stopped. So being a musician, I was listening to see if she was in the right key for some strange oddball reason, which did not matter at all. Anyway, she must have done this for 5 stops in an row and each time it was if someone were tickling her feet or something. It was so refreshing and warming at the same time. I wanted so bad to take a picture of her. She was about 17 maybe. Then at one point, she caught me looking at her, I think. But then I thought, no its just my imagination. About 5 minutes later, her and her mother got up and walked towards the doors. She smiled at me so big as she passed by and she said, "Goodbye, have a nice day!!" I thought I was going to fall out of my seat!! She saw me the whole time and she acknowledged me as well. I was sending her so much energy and reveling in her happiness and wouldn't you know it, she sent it right back to me. She was a little mentally challenged, but very sharp. That was magic. I was moved by that totally unexpected interaction. Never second guess how much attention any one person is paying to you at any given time. Real talk...

Genève said…
Lovely, so lovely, Chase! These are the kinds of interactions that make life full of wonder and grace. Thank you for sharing this. I love your voice, too. (Writing voice, in this case, to be clear.) XOXO
Genève
March 26, 2013 at 1:51 AM