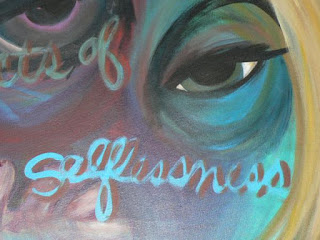 As I have returned to my home and looked back on so many waves of emotions that I have experienced in the past month or so, I am very content with the direction that I am going in. I wanted to let you all know about something that I have been doing for the past month or more in my every day life. We have all heard of paying it forward in one sense or another, well this is on that same level. During my Kundalini journey, I had the pleasure of being around many high vibrational people. They did and said things that gave me some great moments of clarity. This happened so much that it caused me to actually do some things differently during and after the classes were done. I took this and started something on my own.

If you remember back in my posts during the challenge, one day a yogi gave me a cup of tea before herself and I wrote about it. This was a very small gesture, yet it left a very large impression on me in so many ways. I began to think even more than normal about giving just to give and how it affects all of us. So from that moment, I would give at least two people tea before I drank a cup myself. There was something about it that just felt right and so soul balanced. I did this every day from that point after class. I did it because I loved the rush that came from it. So I continued on and now I am doing it in other parts of my life. So The name of this blog explains it as succinctly as possible and it is powerful.

I was at a buffet this past weekend and I remember giving out two plates to the couple behind me as well as two people the following day at breakfast, and so on. This was somehow building a thread that just got stronger and stronger as the days went by. I also let two people go before me when I was on the plane as I waited in line. In actuality, I was not going to write about this for fear of being seen as patting myself on the back for doing good deeds. Then I thought to myself, what if this can start a wave of consciousness with my readers and could change the mood or direction in just one person's life just by them doing what I did? This is completely not about me, its about others for sure.

This past weekend I was with my mother. She has continually taught me so much about dealing with people and what to do in certain situations almost unconsciously and it is still going on today. We were driving in her car and she told me a story about how she has a friend who had just lost her job and did not really have money to pay for tutoring for her son. She went on to say that she contacted her friend who is a phenomenal teacher and gave the money to her up front to tutor this woman's son for one month straight twice a week I believe. Now when I heard this, I felt an incredible rush of respect and elation from this gesture. She did this awesome good deed and she even made sure that it was kept anonymous by telling her friend to tell the woman that it was money from a scholarship that she used for her son and that there was no charge. She slipped into incognito land and just let it be.

The above example is why I am who I am today in so many ways. I have seen examples of that for many years and it still has not ceased one bit. Imagine my feeling when she told me that story? I just could not wait to do something similar as soon as possible. I have read many times that the anonymous giving is some of the highest vibrational giving that you can possibly give and I think I have learned why many times over. It is so much fun and it leaves an impression as long as a jumbo kite in the summer time. I almost felt like the fact that I heard that story meant that I was doing exactly what I was meant to be doing and it was clearly being confirmed. That was an incredible moment. What a magnificent beacon of giving, caring, and loving my mother is...

So give it a try and see what happens for you? Just pull back a little bit this week and let other go before you when you drive ,or go to a buffet , or even just get into line at the grocery store. The rushing and the pushing and the erratic behavior that we all partake in many times seems to get us to our destination quicker, yet in the end, we remain so far behind in real time. Selflessness is a major theme for me right now. At the same time, I am clearer about what I will not allow in my space at the same time. What an interesting set of differences. I do know one thing for sure. Those who have been the most successful in life are usually the ones that have failed the most, yet gotten back up and helped the most people shortly afterwards. So where does that leave you right now? Sit with that for a moment. I don't really believe in failure anyway. I believe in feedback, lessons, and times up to bat. So give it away, give it away, give it away now!!!


Chase
Email Post
Labels: Giving giving of yourself giving what you have gratitude to others pay it forward providing for others selflessness serving others