The Gravity Of Humans / Kundalini Day 23 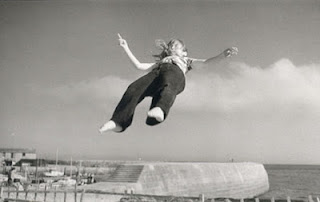 This was a juicy evening. I went to the night class again and I was so happy to be there and on top of that, the woman who is as strong as an ox at about 65 years young was directly in front of me. Now I am an avid observer of people who are navigating life through a different channel or are doing what people say is not possible. So this woman is like pure bliss for me to study. I love to watch her prepare for the class. I have seen it maybe 3 times. She always practices in the same place, which I do not do. I feel that changing my place makes it more challenging for me based on the collective energies of the class. Anyhow, she starts by doing about 100 leg lifts with her hands behind her head. Have you ever done those? Let me just put it this way, I will bet my last dollar that most women her age could not do 20 comfortably. Its not that they can't, its just that they are not interested in applying themselves to do what it takes to get there.

The next thing that she does is to place her fee heel to heel and up on the balls of her feet while she stays on the balls of her feet and goes up and down from straight legs to bent frog legs for at least 40 times. This opens up the channels in such an amazing way. Afterwards, she lays on her back, pulls her feet to her chest crossing over each other, and hold her feet from behind in a tight continuous stretch. Now I wrote all of this, not out of envy, or jealousy, or any negative emotion. I wrote about her because for me she produces and highlights the art of possibility. The best way to show someone that something is possible is to do it. There is no better way to get some one's attention. We have access to our spirit and passion. Most people just can't feel it or see it because their fears, doubts, misconceptions,  hurt, and most of all paradigms are so warped and battered. I enjoyed my class before the class.

The teacher began the class today by explaining that all things that go up must come down. In others words, the force that you give to most anything, will always have the same intensity on the other side. She told us that we should put the fingers from our right hands and join the fingertips together. Then we were instructed to take that hand and place it in our navel. She explained that if you feel a little thumping, that means you are alive and that you are vibrating relatively well if not perfect. Whenever I hear the word "perfect", I get a little tingle. I know that nothing is truly perfect, however, I also know that what we deem perfect is perfect. Its up to us, we make the decision. I had a banana today that was perfect to me, I really did. It was about 8 inches long and was so sweet and perfectly medium soft that I did not want to finish it. Can you challenge me on that point? No you cannot, because you did not experience it at all.

During so many great movements today, the teacher had some very thought provoking things to say. At one point she told us to tell ourselves that we are doing the movements in a perfect fashion. Make it true to ourselves that we are exactly the way that we have to be. Then she said that we would need to be great actors to do some of the things coming up. We created tension in our arms so that we could simulate pulling a very heavy rope top us. As if there was something unbearably heavy on the other end. This was so incredible because I really did feel like I had been pulling something heavy when I finished. I had given the effort and the result was beyond real. We did a few mantras as well and they were wonderful as well. If I have not said so before, each class has a point were we just rest with our head on the floor and our arms at our sides. Tonight when that point came, the levees broke for me again. I am cleansing big time and it feels amazing. Truth be told, in that moment it felt a bit awkward, I welcomed it though and let it flow. It needed to happen again, so it did. This practice is inside of me and its destined to clean me little by little.

I am long winded today and I know it. I just want you all to get the real deal from my experience. So here is a sharp turn back to my good friend that is as strong as an ox. Just when I thought she had taught me before the class started, she had more to offer. Now as you read this, know that I am writing this from an observers mind. I know that I was meant to see what happened and process it right away. A man came into the class late tonight. He chose to sit next to her and in front of me. Sounds fine so far right? Well, he was just a little bit too close to her for her taste, and she immediately grabbed her cloth from the floor and her head wrap or whatever she had with her and she stormed out of the class and did not return. Now when I saw this, the first thing that I did was look at the teacher for some reason. Her look to the man was just saying, "Don't worry, just let her go." I saw the whole thing and it was a great lesson. She decided to leave without discussion and without explanation. He stayed and did not engage her either. The way that I saw it, they both made a choice. If it were me, I would have stayed and compromised with him. That is not right or wrong, that's just what I would have done. The lesson that I learned, which is of course a repeat one, is that once we make someone wrong based on our values, we are dead in the water and the ego tattoos it hold on us. Enough said about that. I still respect that woman for what she embodies and I would not speak to her about this at any point. I also wanted to get the teacher's opinion afterwards, and she told me that we have to let people be where they are and try to love them from there. She smiled as she said this and it was a huge moment of clarity for me.

As I left class tonight, I thought of a little demonstration done with a donut a few years ago. I will make it short. I was in a gorgeous home next to Ground Zero at a private seminar and there was one donut on a table amidst many other snacks. Not one person took the last donut from the table. Then at one point later on, someone broke down and took it. Here's the magic. The speaker and owner of the home explained to us the next day that we should always leave the donut, or the cake, or the shirt, or the dessert for someone else. That message stayed with me all of this time. Its right in step with giving up your seat, or holding the door for a stranger, or giving the last bite of a meal to a person that you are sharing it with instead of eating it yourself.  We always reap the benefit of such karmic actions at the right time. So we will feel the reciprocal effect when we least expect it. Well tonight when I came out of class, there was a cookie sitting all alone on a plate. Although I knew that I was not going to eat it, I was somehow curious as to whom would? Then right before I left, I saw the teacher pick it up and I was so happy to see that. I took it to mean that she was supposed to have it, not that she lacked any kind of politeness or what have you. I shared this little story in a live fashion with a new friend of mine from the class and she agreed and actually said that she knows about that concept. What magic.....

Have a great day or a peaceful evening.    Saa Taa Naam     (these three words directly translated mean; Totality or infinity, and life). It is how we greet each other and what we say when we depart in kundalini. I really enjoy the feeling behind it.   May the day serve you well...