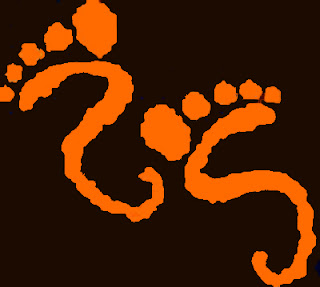 I am feeling very good about completing 20 days in a row and there have been so many messages that I have already received that makes it more than worth it to continue on this path. I almost got gridlocked today because of another commitment, however, I had to make a decision and I made it. I told myself later that there was no right or wrong, there was only a choice. It was not easy to get out of bed today because I was carrying a little bit of back fatigue from the evening before. My mind wanted me to stay in bed, yet I got up and did it anyway. If you have even dome something that you really did not want to do and felt the after effect, its one of the most rewarding feelings ever. I once heard Michael Jordan say that his best workouts were the ones that he did not want to do in the end. That has always stayed with me in every thing that I do.

The class today was very crowded today. It was so crowded that I had other yogis within a foot of my body to the left, right, and behind me. The great part of that was that I was in the front to the far right of the teacher, so I had nothing in front of me. There were some strong yogis practicing around me today as well. There is this one woman who has to be at least 60 plus, and she is as strong as an ox!! I know people in their 30's that could not do 10 leg lifts with their hands under the small of their backs. This woman does about 25 or more before starting class just for warm up!! Before we start the class everyone usually does something to get their body moving and so I notice different techniques and I remain a student in every way.  I just love the synergy once the class starts. It is truly infectious.

We did quite a few small movements for short periods of time today. Shorter than normal, I should say. We did some great things that really woke up the energy in the body and to move energy from the bottom to the top of the head and heart center. During class today the teacher told us to be present and to give love to the people that cannot properly love themselves. This was very profound to me, because I was doing this already at that very moment. It just further confirmed that it was truly meant to be transmitted to this person. I really entered sort of a mental cruise control today. I did not feel the time at all. We did a 31 minute meditation at the end of class today that gave me such peace and solitude. This is why labeled the posting what I did today.

Now one of my most favorite things to speak about or to write about is manifestation. Last month I manifested a $50 book that I loved and today it happened again. I have been practicing kundalini almost a month now. So I had been searching for a few books that would educate me when I am not in the room. I have such a wide range of choices that I had mentally narrowed it down to 2 books that I would purchase. The first one is called, The Master's Touch, On Being A Sacred Teacher For The New Age. You do not have to be practicing kundalini or to even be interested in teaching it to benefit from this book. The knowledge in it alone can change your perspective about life as you currently know it. I doubt you can read this without wanting to practice kundalini though, truly I do. There are recipes, and mantras , and so many other things that will help you right now. I have just about read the whole thing just by flipping through it about 12 different times.

I digressed seriously just then. So I had narrowed down my books to that book above and another one called The 8 Human Talents. This second one was recommended to me very highly by 4 separate people. I also picked this one up a few times and it felt so good to read. So i had decided that I would buy the first book that I referenced this week. Today I planned to drop off two library books back to the library and I thought that I would go and see a dear friend of mine who's company I really enjoy. Within 10 minutes of this thought, she called me. I told her that I was just thinking of hr and that I was going to call her to ask if I could stop by on the way to the library. She told me that she had been thinking of me as well and that she had a gift for me as well. I told her that was so amazing, and then we both said that it actually was not that amazing, that's just the way energy works.

The conversation took off as soon as I entered her aromatic and oasis like apartment. the colors and the feeling in her space always makes me feel so relaxed. I have only been there maybe twice before. So we discussed what we were up to and what was in the near future for each one of us. Then we grazed over a couple of relationship issues that we both agreed on as currently single people. About 40 minutes or so later she told me that she had to go and get the gift that she had for me. Then it happened, she handed me "The Master's Touch". Now at this point you might be saying, "What a coincidence!!". Well, I no longer believe in coincidences at all. I believe that it was the right time for me to have this book and that I sent it to myself. I allowed the universe to serve me and it came quicker than I thought it would.

The simple gathering of two souls to speak and exchange there thoughts, insights, and possibilities is without a doubt one of the most under utilized luxuries in this life right now. We sipped tea and gave each other the respect of listening to each other and exchanging some very important life gems. It was a great time for sure. There was no indication of ego or competition in our conversation at all. I read a quote from my new book already and I have to share it here right now. Are you ready?

"Where there is ego, there is no amigo."  - Yogi Bhajan

Today was a great day for my soul. Thank you for being here to share it with me. I appreciate it in a large and indescribable fashion.