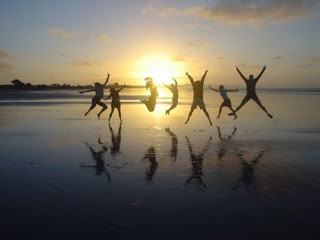 The magic in today came from my yoga practice without a doubt. Each day has been different and that is for certain and I am sure of this. The thing is, somehow today had a specific meaning and I will explain. When we begin anything, I believe that remaining open is always the key no matter what it is. I actually have heard over and over again from the most highly vibrational people and the most celebrated luminaries, that is always best to remain in the novice mindset. these means that you should always have the brain of the student even when you have tons of knowledge. This leaves the door open for newness at all times. So if you have been following this blog, you know that this particular style of yoga has no daily continuity out side of the beginning and ending mantras that are spoken or sung.

Firstly, I was greeted in a very soothing way today. A woman that I did not know at all just looked at me and said, "Well look at you!!!". I had on a double breasted suit jacket and a white shirt with dark pants and black shoes. What made this so special for me was this woman's authenticity. She did not know me at all, but she had seen me previously in the week. So for her to greet me in such a complimentary way was such a nice and unexpected thing. She liked what I was wearing and she told me so. That was so real to me because of how she began the exchange. In so many situations right now, people are afraid to engage with each other. She proceeded to talk to me more and it was a great conversation. Its always the simple things. She also told me her name and it just so happened to be the same name as a good friend of mine from grade school. I explained to her that I had just gotten back in touch with her through Facebook and how that was a bit strange, yet interesting.

Now back to the magic. After doing the opening mantra and another exercise, the teacher actually told us to dance with no inhibition and with eyes closed for about 10 minutes. Now I am unsure how many of you have tried to dance with your eyes closed, but its a very different thing. Your body shifts around and you can completely lose your center. When you are dancing in a quasi euphoric state, nothing matters but the dance. I say that because you have no choice but to feel how you are feeling. So we danced to at least 3 songs and I was perspiring and feeling great. I had never been told to dance with your eyes closed and just let it happen. There were no barriers or rules. We were  told to just to dance and let it happen. Today's class was centered around prosperity. The mantra was designed to invoke guidance and sustenance. I felt every bit of it..

I had some difficulty doing some of the poses, however, it was well worth it. I am thinking about that statement, even as I'm  going to sleep now . It is another way to say dance like no one is looking, in my opinion. This practice is so right on point for what I feel that my soul requires in this period of my life. On another note, class went by very fast today as my mind was so engaged in the moment. That is what I am working on more than anything right now. Things are happening around us. However, the moment passes so quickly, that even when you try to take a snapshot of it, you are actually only taking a snapshot of the moment that follows it and not the one that you think you have captured. This is key for me, because it lets me know that we will always have a chance to do better. I will return to my practice again tomorrow, and it will be different again. I am growing and it feels amazing.

In which direction would you like to grow this year? If you could pick something to master, how would it change your life and what are you willing to give up to conquer it? Thank you for reading as always.