I Expect You To Do This / Don't Judge Me 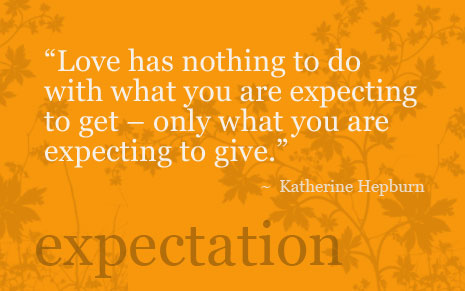 This posting is one that deals with expectation and judgement. I am not a guru or the authority on these topics, so let me be crystal clear on that before you read any further. I have however, taken some hits and made some bad decisions based on these two words and the meaning that goes along with them. As we grow our perspective changes in a sizable fashion and we get to see things from an aerial view as opposed to from the window seat. I know that I don't know everything there is to know and that is what keeps me searching for the answers.

When a mother is pregnant, she is said to be "expecting". This means that she knows a baby is coming and so does everyone else. When you order through the Internet, you expect that merchandise to come within about two weeks because you paid for it, correct? When you but a ticket to an exotic place or even just home for the holidays, there is no doubt that you definitely expect to arrive in the airport right around when they said you would. These are all very literal examples of how this word is used. I have of course set you up for what is to follow in the next paragraph.

This little series of sentences above seemed to work without incidence wouldn't you agree? So how is it that when human beings expect things of there loved ones, most of the time they do not know what is expected of them? In my opinion, love creates expectations and then the expectations shatter the love. Is this 100% true all of the time, of course not, but it is very common. Picture a woman going in for a new job at a very exclusive and top level company. She is just flawless in her speech and dress and qualifications. As soon as she enters the room she feels a certain energy from a certain gentleman. This man just happens to be the CEO of the company. He makes sure that she is hired and then a weeks pass by. She just so happens to be married as well, so this is not going well from the start. She makes the mistake of saying some very complimentary, yet not unprofessional statements to her boss on his dress one day. He then decides that she can move up higher on the corporate ladder if she would attend some after hour dinner dates with her boss. She politely declines and his ego is hurt. The woman is magically downsized 3 months later and given some strange reason why she is no longer needed. Stay with me.

A man and a woman go out on a date. They have been dating for about 6 months. They have gone to dinner several times and he has picked up the tab 8 out of 10 times. One of the other times she was with her children, so she paid for them and offered to pay for his as well. The last time they split the bill with each other when they were alone. Several weeks later they were discussing their relationship and the woman makes it known to him that she was very disappointed that the man did not pay for the meal each and every time that they dined out. She told him that she expected her man to pay for her and the kids every time. He was taken aback and did not really know what to say at all. His intention was always to serve her to the best of his abilities and that was his main focus. Inside he felt that they were a team and at times it was perfectly fine to share the load in a given situation. So what's the main theme here? The theme is that most of the time, expectations are kept within ourselves, which creates future dysfunction and stress. This is a very consistent mode of operation.

A woman is not easy to fully understand and neither is a man. They both come from different paths and have had to endure several battles along the way that they may not have resolved as of yet when we meet them. Society expects things from them and all of society does not even know them.Just like you would not tailor a suit and place 100 of the same size in a clothing store, you cannot treat any two human beings the same way.You expected Michael Jordan to shoot the ball and get it in most of the time when you watched him on television back in the day didn't you? When he missed, did you turn the channel or just clench your fists, make a sound and move on to the next play? This is what we should employ in life. Imagine how stuck we would get if everything worked out just as expected? There would be no nuances, no hope for something new, no diversity.

Our expectations place a governor on our freedom in so many ways. I say that because when we do not get what we expect, it knocks us down and we have to stand up again no matter how far we have fallen down. Have you ever heard the expression, "expect the best but prepare for the worst?" That's like saying jump into the pool, but try not to get wet! Did you know that it is not possible to be negative and positive at the same time? Sit with that for a moment. I digress, my apologies. Anyhow, I just feel that we should expect more from ourselves before we expect more from others. When we judge, we are turning the mirror on ourselves unless we are truly responsible for our actions and are man or woman enough to say so and take the hit for it.

Then there is judgement. I recently had someone tell me in a very rude tone that if I had not spoken to them in a rude tone, they would not have spoken to me in a rude tone. So I sat with it and truly tried to understand if I had spoken to them that way. From my soul, I did not intend to speak to them in such a tone, however, they received it that way. Have you ever had a person tell you that they did not like the tone of your text that you sent them? News flash!!!!!! There are no tones in a text message. We are the sole provider of the tone that we give to any text message. That is brilliant in my book! So we can make it mean anything that we want. Then when we actually speak to that person, we are where we chose to be, not where they have put us. That hit me like a brick when I realized that I had actually done that.

I want to be clear that there is a difference between judgement and standards. There are a few select people that I know that will not allow themselves to be treated less than exceptional. They walk, talk, and breathe, with bundles of integrity and pride. These individuals will also reach way down low to the ground to help anyone. I know this because I consider myself to be one of those people. Oh and by the way, I have allowed myself to be treated less than exceptional and it has made a mark. Truth be told, I am no better than the next guy as it relates to stumbling here and there in life, however, if I get knocked down hard, I look up very shortly afterwards.

There is no book written on how to be perfectly human. If someone tells you what they expect from you at a job, a meeting, a class, or a lecture, that is one thing. However, we cannot be held to the expectations of each other as it relates to personal relationships unless both side agree on it ahead of time and are truly comfortable with it. If you are not told what is expected of you, then the person who placed such pressure on you is shooting themselves in the foot twice. I have never met the perfect woman or man. If I did and actually claimed it to be true, I would only be living through my own expectations. There is nothing wrong with that in real time, but it would only be good for me. I would spend my time convincing others that this was undoubtedly true and I would deplete my soul trying to convert the naysayers.

Expect the best from yourself and be the best you that you can be. If you become beautiful inside and out to such a high extent, others will be clamoring to be around you because they will expect nothing from you but what you already are. We can lift each other up by just stepping up higher within our own space. There is nothing wrong with helping others to raise up in their lives, however, when we judge them, we are actually pulling them down with us. That is not a positive recipe at all.

I had a conversation with a woman tonight that I had to drop some keys off to from a good friend who was out of town. She asked me what I did and I told her a few things that I love to do and that I do to make my living. We also spoke of learning languages and so forth. She then told me that she wished that she could speak another language. Without blinking, I told her that she could. She then proceeded to tell me that the brain is so much slower at learning at her age and that it would be too hard. I told her that it would not be and that she should just do it. A couple of seconds went by and she said, "Wow, you are so positive!". In that instance, I realized that she had her own expectations about herself and she was merely living comfortably inside of those walls. So was I judging her for those statements of mediocrity that she spewed or was I placing expectations on her that I have in me based on my prior accomplishments? I will let you marinate with that.

Thank you. Your presence here is felt more than ever...If you have a comment or a request or anything to share with me, please email me at open2itall@mac.com or leave a public comment by clicking in the area below. I would love to hear what country you are reading from and if there is anything that I can do to help any of you from any part of the world.....

Anonymous said…
Your words make so much sense and I appreciate you. This really helps me. Thank you sincerely..
December 17, 2012 at 3:29 PM