Getting Back On The Horse / Amir Recall

To say that I have not written in way too long would be a huge understatement. I have been caught up  in a wave of emotions on every level since my last writing. So many things have happened that I can hardly believe it myself. I have made a conscious effort to keep any negativity or low level writing here so as not to compromise the integrity of this blog. Then as I was going through some things I realized that the magic comes from the realness in our lives, and that the unfortunate things are many times what makes us most prepared in the future. Not only to handle things better, but to appreciate when things go well. I have been letting this all seep in as I prepared to write this posting.

I have experienced a few deaths around me in the past year and I have been to the hospital to visit others more than any other single time in my life ever. So as I may have said a few months ago in another posting, what is the message here? Is it my time to be reminded that I am still not living passionately enough? Or am I being reminding that I am still not giving enough to others? Maybe its a direct indication that I am about to embark upon something very big and that I must be prepared to step up to the plate in a big fashion? Either way, there is a message in all of this and I do not have to figure it out, however, I feel that I must take heed in a major way. So needless to say, this is exactly what I am doing. 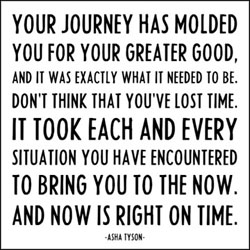 During the past month I have had a strange interpersonal exchange as well and it has humbled me to no end. It made me further believe that we do not have to "fix" everything. We are all human beings and some things need to be left alone just the way that they are or you will be stretched beyond your mental, emotional, and sometimes even physical reach. I believe that our time here can be so mentally taxing at times, however, in the blink of an eye, I also believe that we can alter our own state of mind and take ownership of our atmosphere. The tears that I have shed this month could fill up ten medium sized mason jars without question. I had to be honest with myself and ask what I was truly hurting about inside? Was it that I felt that I was living outside of my integrity? Was it that I was not being seen how I wanted to be? Was it that I was trying to push a square through a circle? Maybe I was just planting apples seeds and expecting tall banana trees. I have been under harsh self examination.

I came across an incredible quote just before I sat down to write this. It really put a light on inside.

"Relationship issues are rooted in the competition for the victim position." -Gay Hendricks

As I read it, I thought about how many times we are in a situation and all we want someone to do is to recognize our hurt. Then I though to myself, but how does that help us in the end? I do believe that when we are around the right people, the times when we feel hurt are minimal at best. Actually, no matter who we are around the most, the hurt always starts with us. If I can be honest with myself and pin point why I am feeling a certain way, it will start with me 90% of the time. So that kind of takes other people off the hook doesn't it? Can you say that other people make you angry or put you in a certain state without your permission? This is a tough one for me as well. The answer is undoubtedly clear though, not one person on this earth has the power to do that unless we give them a pass. So the inner soul work lies in our own hands at all times.

A few days ago I sang and played guitar at a very close friend of mines memorial. When I tell you that this was one of the most intense memorials that I have ever been to, I am truly telling you the truth. The love was pouring out of every orifice of this modest funeral home in an uncontrollable way. My friend was an incredible performer that I had been on tour with from about 2002 until 2003. His name was Chris Amir Boyd. He and I had a very special relationship and I cherished it deeply. As the time came closer for me to let the organizers know what I was doing, I still did not know what kind of song I would offer to this special day. It hit me then that he would want me to speak from my own voice and not some one else's. I picked up a piece of paper and began to write the words that aptly described this supreme being. The words flowed effortlessly and I was proud of each sentiment that leaked out onto    the page.

I entitled the song "Amir Recall"(I will post it here when it is recorded) I named it this for two reasons, one because I was recalling all the great things about him and because I truly do believe that he was "a miracle" in my life in his own special way. As a walked up tot he stage to perform it, I was careful to be happy and not to break down in the middle of the song. I was not successful at first and I allowed myself a couple of seconds to regroup. In the end, the song reached the people and I am certain that it reached Chris as well. As I review this whole process, I realized that I was focused and I made it happen in a very short time frame of two days. This was another reminder that when your purpose is clear and there is no doubt you are living from an honest and selfless place, anything is possible. I never thought that I would not finish the song or that it would not come across correctly, I believed fully that it would be carried out from a place of love and tenderness.

So now that my perspective is a little bit clear about what I intend to do to add to the world as well as what I intend to surround myself with as it relates to people and things, I feel a bit lighter, a bit sharper, a bit more in sync with my purpose. All of this is usable information for any of you because each of us needs all of us, as I have said in the past. Thank you all for continuing to read and send me your energy. I feel that writing this blog is making a difference and that is why I continue to show up over and over again. I appreciate you all..