Bathroom Is For Customers Only 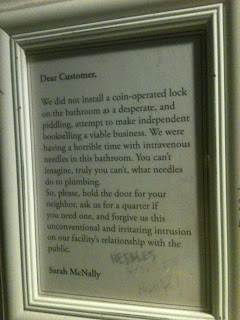 We have all seen this sign so many times and I am sure that it makes us a bit frustrated when we read it. If you gotta go, you gotta go. I had a situation yesterday that made me think a little bit more. Now when you have to go to the bathroom in NYC, there are options everywhere. Its usually just a matter of where you are in the city. So I had to go so bad that I just walked into this cool restaurant and made a b line to the lavatory. This place was full of people, yet one of the servers followed me to the bathroom and said, "Can I help you?". I said, No, I am just fine". He then proceeded to tell me that the bathroom was for customers only. He also said that the street fair had brought many people into the place and that the bathrooms were filthy because of it. I explained that I was already inside of the restaurant and I asked nicely, and he did not grant me my wish.

I proceeded to go inside a bookstore that was next door and it happened to be a bookstore, so I had no problem browsing for a few minutes, just to make sure that I had sealed the deal. I then walked down to the lower level to find the bathroom, actually I knew where it was. There was a line, so I had to browse some more. It was clear that the people waiting were from the festival that was a block away. I waited patiently and right before I was about to go, a woman walked up and I could see that she had to go even more than me. I graciously let her go ahead of me and I waited a few minutes more. It was finally my turn and I entered the bathroom. As I entered, i saw paper all over the floor and I began to pick up every piece by hand. I attribute this action to my mother, who I am sure would have done the same thing. I did that because I was still back at that guy's statement about how people left the room dirty and all. I wanted to protect the next few people that came in from that sight as well.

As I looked on the wall, the picture above was there and it stopped me cold. You see, I believe that a business owner does have the right to tell people that the bathroom is for guests only, however, I also believe that there are exceptions to every rule. So when I have to go badly, and I enter nicely dressed and polite, I want to be given a pass. That is just my viewpoint, but it has holes in it of course. What if 50 people walk in exactly like that over the course of an hour? You get my point. Overall, I found this frame to have such honest and open words that really made me think a little bit. If it is not clear, I will write what it said here:

We did not install a coin-operated lock on the bathroom as a desperate , and piddling, attempt to make independent book selling a viable business. We were having a horrible time with intravenous needles in this bathroom. You can't imagine, truly you can't, what needles do to plumbing. So, please, hold the door for your neighbor, ask us for a quarter if you need one, and forgive us this unconventional and irritating intrusion on our facility's relationship with the public.

This was a magic message in a frame to me simply because it made it clear to me that there are many things going on in bathrooms that add to it becoming unbearably clean and malodorous on any given day. Most things that take place are never spoken about for obvious reasons. She is aware and compassionate without being rude. How anyone looks or speaks or asks, is not the issue. The issue is human based and it can go a wry at any moment on any day. By the way, the coin-operated door was out of order. It just locked from the inside like a normal door. Thank heavens for that, because I had no change on me at the time!!! We are all in this together..Sorry for the break in writings. I am back now!!!!!