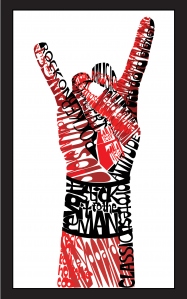 I can go so many places with this posting, so I will just start from where I am in my mind right now. In the past few months I have been thinking so much about the importance of giving someone your word. I mean about anything at all. If you have borrowed something and need to give it back. Maybe you have not produced something that you said you would or even just being very late for an appointment, it all comes back to your word. I mean let's be real, we have all broken our word to another human being once or twice right? So how does that feel to you? Do you let it slide and say that its just life or do you work hard to correct it. We are all connected, so what we do does have some affect on others no matter what we do. So does that mean if you start to not care about your word that it affects others when they give you their word?

How many of us know people that tell us how they are always late? They tell us ahead of time so that when they are late, their is no accountability on their part. They told us who they were and our job was to accept it and be at peace with it or else. I have friends like this and they are worthy of respect just like me in this life. The flip side though is that we can only be responsible for who we are and that will never change. I will always attract more people into my life by being more accepting than I will by being more judgmental. So when someone breaks their word to me, I do not always have to call them on it. This is what I am learning more and more. The coolest part of that is that you can still maintain respect for them even after the smoke clears.


I wanted to dig deep as I thought about this and so I did. I live in one of the greatest cities on the planet. People are always rushing off to places and making their presence known and all sorts of random things that go on each and every day. The thing that keeps me plugged in to people though is how they react when they truly want something. Let's take music for example, the hard core Springsteen fan would not miss his concert or even be late for it. The feeling that they will get from watching every drop of the show is non negotiable. If my favorite musician of all times called me to be at a rehearsal in the next two hours in midtown, I would be there early at the very least. So I ask the question, does our word have a direct correlation to whats important to us. Some people can always find a way to follow through, while other can always find a way not to. This is serious stuff and I test myself on it all of the time.

In my industry, lateness can really hurt your reputation. I have worked in the service industry, the theater industry, and in the quasi corporate world. I have never seen it not be very important. The truth is, we are all our own company because we are always promoting ourselves no matter what we do. So if there were two tables side by side to each other and one sold high integrity and golden words while the other sold false hope and empty promises, which one would you load up on? That was not a trick question...

I looped dangerous words spoken into this posting because I thought of some that had been rendered to me in the past month or so. Sadly, i remember them vividly and I must say that they have left impressions on me. These are words that have been verbally offered to me were not the nicest, in fact they were dangerous, like fumes from the tailpipe of a 20year old car that needs an oil change. As I heard them I thought to myself, wow, this person has just drilled a hole into my soul. Then I thought, wait a minute, I am in control of that. So I became quiet and let them take the ride, solo. Have you ever said something so terrible to someone and then later just wanted to rip out your own tongue because of it? In short, dangerous words need not be spoken and they definitely need not be paid attention to.

The magic of all of this is that if we want to know the true meaning of keeping our word, we should go and ask a patient who has to have his/her medicine administered at the exact same time every day by a nurse or they will die. We could also ask the performer who asks her friend to pick her up at a certain time for the most important audition of her life. Its all important when it deals with serving others. That's my perspective on this whole shebang. We show up when we want to because of why we want to with whom we want to at the time we want to. All you have to do is take some inventory and see for yourself. So glad I got that all out.....Keep striving..