Man Of "Joe" Puts It Out There 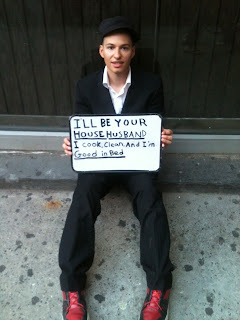 This is Joe. I ran into him while walking down the street. He was so real and innocent in a strong way. I mean what could we do if we truly met the entire world with our truth instead of what we felt would make us "blend" or be "accepted" in life. I read this sign twice for clarity and then I had to turn around and go back to speak to him. Yes, I did pass him at first and just take it in personally before processing it fully.

We had a very brief conversation and I asked him a few questions about his life. Why is he out here? What was his motivation? Had anyone taken him up on his offer? He was very honest and open with me and I was impressed with his forward nature. I also thought it was cool that he was dressed nice and spoke well to boot. He told me that he wanted to make his own money and not live off of his mother anymore. He wanted his own place and the ability to make his own decisions. I politely asked him if I could take his picture and made him aware that i would be using it all for my blog. His next question? Do I make money with my blog? Smart young man, I told him that I am just writing good content for right now, however, I plan to release an ebook shortly and other handmade things later on. He explained how he knew of guys making lots of money just with selling advertisements on there blogs. I was impressed that he knew that as well.

If you are having trouble reading the above sign, it says, " I'll be your house husband, I cook ,clean, and I'm good in bed". Now of course, without that last sentence, the sign may not have had the same power, but that's just my viewpoint. Joe continues by telling me that someone had offered him a place to stay just yesterday and that they were calling him today. I will ask how that went when I see him again. I will see him tomorrow. I have a proposition for him of my own that involves using his cleaning skills. I was just so moved at how he packaged himself and just took to the street.

Many people complain about not having many things, yet, they do not go out and get it. Joe is out there shaking things up. You may not agree with how he is doing it, however, he is participating in his own rescue. Earlier I wrote that I had a proposition for him, well I actually have 2. The other is to use his looks, charm, and drive to make lots more money and to leverage his skills through others and really make a big difference. I will introduce him to that tomorrow.

What I love is that when you stand out in the street you are really part of the flow. When you stand on the sidewalk you get to see another perspective. However, when you get on the bike or in the car, you get to feel the breeze and see different things and make continual moves. That is magic to the tenth power. By the way, Joe has left me a few texts asking questions and following up about tomorrow. He is a pit bull for sure. I love it....
Chase

Email Post
Labels: good in bed having skills and using them one man labor services offered from the street solo work street signs held up by people taking chances will work for money