Ahhhhhhh! In The Fine Spirit Of Giving

My day started by me rising early and helping a good friend move her car from a parking spot because the car was not functional. Long story short, she came to move the car, however, it did not start, so we were preparing to push it down a hill and pop the clutch so that maybe we could get it going. It turns out that right as we were about to do this, a man showed up that was parked behind her car, and so we asked him for a jump. The man was cordial albeit a tad bit in hurry. He decided to help us anyway and she was able to drive the car off and straight to the mechanic. I do not believe that any part of that story was a coincidence. That man was there right on time because he was supposed to help us.

I was on my way to the laundry after I had helped my friend, or should I say, I was prepared to help her before that incredible man showed up. Anyhow, I asked her if she would drive me about 5 blocks to the laundromat so I could clean my stuff. She was more than happy to be of assistance and it all worked out. As I entered the place I was greeted by one of my favorite people in the service industry. Her name is Sheshe, which I believe is "Thank you" in Chinese. This woman smiles so big when I see her and we always have such a great exchange. I told her that I was so happy to see her and she replied," Yoo pic up dry cleaning?' I told her that I could not carry it now, but that I would return the next day.

I have a friend that lives next to this place, so I called her and asked her if she was at home, literally next door. We were scheduled to have a tea together this morning, however, she called me while I was about to help my friend. She did answer and she came over to see me. At this point she asked me if I would help her to move a bookshelf out onto the street and I of course said yes. This bookshelf was rounded and looked as though it should be in a nice open room with lots of plants and light. As we made it to the side walk, I told my friend that this would not be here for long for sure. Someone is going to take this right away!! So we were walking up the stairs and a small woman stopped next to the shelf. Enter Galina from Moscow. 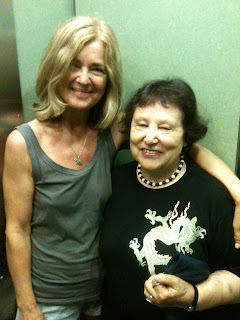 This woman was about 70 or so, but she wore the smile of a 25 year young woman. As she looked at it, my friend approached hr and told her that she could have it. She was so happy to hear that sentence, however, she knew that it would be too heavy for her to bring back to her place. In an instant, I knew that we had to bring it back for her. No mind you, I had no idea where she lived, I was just going on faith. We asked her where she lived and she pointed to the next block. I was amazed that she lived so close. So we took a short walk to her $106 a month one bedroom apartment. As we entered the lobby, There were others there who seemed to be taking in some rest and some sun.

We were then zipped up to the 7th floor and we placed the shelf in her apartment. She was so happy and I think she thanked us about 750 times. She kept saying that she cannot believe that we brought this to her house for her in her broken English. A woman that we did not know 20 minutes ago let two strangers into her home to deliver her unexpected gift from the curb and it made her day in a very large fashion. She was so gracious and nice that I just wanted to do something else for her!! We were both just filled with so much light and happiness after providing this gift to her. I was in her apartment with my friend and she asked us to come to the window and look at the view. She was so excited to tell us that she could see the Statue Of Liberty from her window as well. Here is what the view was like. I particularly love the grid that covers the picture. This was taken with my cell phone. 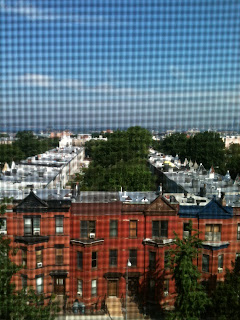 This exchange was my early morning gift of magic in so may ways. We helped another human being who did nothing but express interest in a bookshelf as well as make a new friend who was so happy with our presence. In the blink of an eye, we changed the vibe of her day. As I talked it over with my good friend, who's name is Danuta, by the way. I asked her , "Isn't it amazing what you can do when you take the concentration off of yourself? She agreed and we both felt as though we had just performed the work of angels. We will invite Galina over for dinner in the near future as well, Whether it's my house or Danuta's, we want to create a friendship with this vibrant 70 year young woman!!!

Do a good deed today that takes the focus off of you. Do not accept any money for it if they offer either. Letting a good deed flow changes the vibration in a way that is just colossal!! I dare you to try it..Thank you for being here..