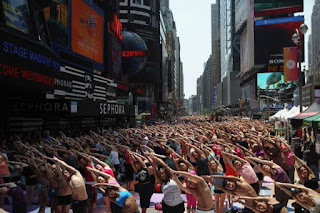 I can say without hesitation that there is definitely power in numbers. Human beings can do the most extraordinary things when they decide. Close your eyes and imagine something that is seemingly impossible and sit with it each and every day and by the end of the week or sooner, your mind will be sending you signals on how it could be possible. I learned a very long time ago that our brains do not have an opinion on what we can and cannot do. We decide and then the universe dashes off feverishly looking for a way to materialize whatever we desire.

I also believe that when we feel as though we are part of a force greater than ourselves, it drives us to the core. It causes us to be, do, and have a plethora of things that may have otherwise eluded us. Whenever I see an extremely large amount of people in one place waiting in line, or queuing for a restaurant, or even at a concert, I know that they have all made a decision that no one else can change. They will be a part of that particular meeting or movement, and that is that. There is so much raw power in that mentality and it excites me just to write about it.

For the second year in a row, I attended "Mind Over Madness". This is a yearly gathering that allows several thousands of people to practice Bikram yoga in the middle of Times Square, which may very well be the most alive, crazy, noisy, loud, and diverse place on the entire earth. It is a complete mind flip to thin that anyone would even want to practice open eye meditation there, much less even believe that there would be other people there as well. Unfortunately, this falls under the anything is possible folder, because over 14000 people showed up in three different shifts and we all made history. There has never been another place in the world where that many people practiced this incredibly cleansing series of bliss.

What made me laugh internally was how the tourists took pictures and how the men who were not in class gave their full attention and magically had no where else to be at 12:30 in the afternoon. Once again, we do what we want to do and we will make provisions whenever it becomes a bit challenging. I was in the hot sun the entire time. There was a great deal of shade mixed in with the heat, however, I felt completely cleansed by the end of the the sequences. The one question that I asked about 50 times that day was, how is it that over 14000 people could find there way here just to sacrifice 90 minutes for the good of their body and soul? Did they all ask for the afternoon off? Did they feel their spouses that they had some errands to run? Maybe they cancelled all of their appointments that day and just decided...

I felt great being there and saw so many people that I love and respect from class too!!To be a part of that movement was just too big of an emotion to explain. The same way that people go to see GaGa or Bruce or Prince or Madonna, this day was no different. They all made the time to be there and to be present. What was in it for hem to be there and partake in that larger than life event? I believe that it was the feeling of solidarity and love for the human spirit. There were many emotions, toxins, negative thoughts, and new discoveries that took place on that day. If you can do Bikram in the middle of Times Square, then you can probably do most anything else as well. That is my belief anyway.

It was truly a magical day that I will never ever forget for the rest of my life. If you have never taken a Bikram yoga class, I challenge you to do so right away. It is something that your body will thank you for as you move forward in life for many years to come. Namaste.