Now I have written many times about my numerous wedding gigs and how they always produce certain emotions inside of me. This past Saturday I was high above Times Square and full of emotion once again for many reasons. I find it so peculiar how certain moments just move you in a way that you did not think they would. Actually, you don't even think about it, the truth is that it just happens. 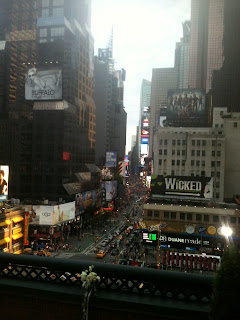 I love the sight of Times Square. It's a place that just yanks at your insides and demands it to pay attention no matter what time of the day it is. The lights and the billboards and the diversity of nationalities that come just to sit there and stare in astonishment are just priceless. Still to this very day, I will go to Times Square with my camera to snap away and be very content with the outcome no matter what.

As I stood in the lounge area several floors above Times Square, I could feel the love of these two young men that were about to make their love official and to embark on a life as a unit. There were others that passed by this lounge just to stop and have a look at what was going on and they were equally moved as well. The ceremony took place outside and there was glass all around, so it was only semi-private. As I watched others stop to see what was going on, I could see that the potency of the moment could not be ignored. I was certain that there were a handful or more people watching that did not agree with two men getting married, however, even they could not resist the energy of this moment. 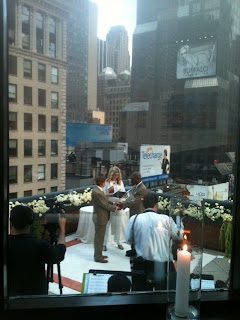 Interestingly enough, although I was hired to sing from 8 until 12, I only sang from about 10:45 until 12. The entire evening prior to me singing with the band was spent watching this couple circle the room after becoming officially married, watching a video that showed both of them from children into their adulthood, as well as them cutting their amazing cake. They also fed the band as if we were family at a table of our own. The live music was a mere silver lining to the evening and it was received quite graciously. I was so honored to be there and to have contributed my voice to this truly incredible wedding. I have done weddings that were 20 times as lavish with 4 times more people in attendance at places 5 times more upscale. The magic is that somehow, someway, these two really seemed to be genuinely in love. Their love permeated the entire room. Wow!!!

I have a blessed life. I love sharing these moments with you all...