A Magic 3 Hours In The Studio

Now for those of you who have never been in a recording studio, some of this might go over your head, however, I will do my best to bring it home for you. When you sing in a live setting there are tons of things going on all over the room. There are sound people, plates moving and being eaten upon, people talking, people dancing, and of course usually other people singing as well. When I perform I have to be aware of all that is around me when I am in public. It almost like driving a car, you have to be aware of your surroundings 100% or you could have a problem. 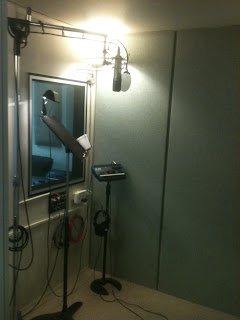 Here is the flip side of the equation. When you are in the studio you are there in a little booth or a small area that may not even be enclosed and you are there alone. If you cough, burp, tap your finger, or anything subtle, its heard. Granted, you could be with other singers, however, your voice is absolutely shockingly audible and that which comes out of your mouth is just raw. Now there are chances to equalize and to tweak and to try it again, but the fact of the matter is, when the tape rolls, you either have it or you don't. It like the difference between arriving at the beach in your favorite swim suit or arriving at the beach completely nude. If you know that everyone will see everything, you better be prepared to make an incredible impression or you will be talked about to many for a very long time. 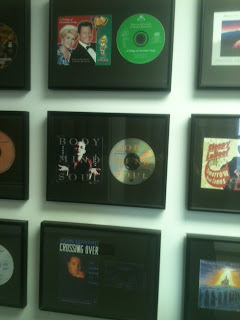 I arrived at the location a half hour early so as to be sure that I could park and that I could get some liquids to properly lubricate my chords. I found parking immediately and I found a juice place right afterward. The best thing about this session that I was called to do it based on a recommendation by one of my peers that I highly respect. I also had no idea what I was going to be asked to sing in complete. All that I knew was I would be possibly be using an "island" voice at some point. I was up to the challenge and I was confident in my abilities. As I heard the tracks for the first time, I knew that I could do what was being asked of me and I started coming up with musical ideas. Both the songwriter and the producer/engineer were just the most polite, gracious, and real people that any musician could ask for and I felt completely at home.

The first picture above was the actual area that I sang both songs in and the other picture is just a snapshot of some of the musicians  that had recorded in this studio. I posted them both because I have always seen myself singing in a state of the art studio from as far back as I can remember. I have been in several studios over the past few years and each time I set foot in another one I think to myself, "you are getting closer and closer to realizing all of your dreams". There was a weightless feeling that I had during the entire session. I was focused and in my game. I loved every single minute of it. I felt like a young child licking an ice cream cone in the thick of the summer at the beach. To say that I am grateful would be a huge understatement...

I left the studio today with a feeling of accomplishment and elation. When someone calls you to do something that you love its as if you are being given a gift that cannot be felt to its full power unless they could somehow get inside your mind and walk around for a few days. People give their kidneys, their eyes, their lungs, and many other parts of their bodies. All I can say is that when you are called upon to give your voice and your passion it is just indescribable. Baby steps turn into progress, and progress eventually turns into a tree that starts to bear fruit. I will sing my first originals live at the end of the month. I am tingling inside, truly..Keep on challenging your assumptions........                                          Chase