Magic In An Elevator 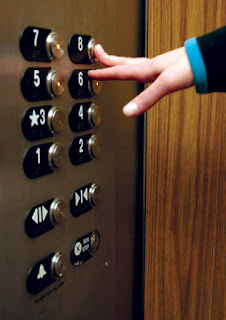 At some point or another, we all find ourselves in an elevator with people that we do not know. In this instant we have the choice to speak or not. Other times, the people speak to us first and then we follow suit. Such a small compartment can yield very interesting results. Often times people enter already engaged in their own conversation and we can just listen and sometimes just be amused by the topics that they are speaking about. I particularly love this scenario because it amazes me how nonchalant some people can be when it comes to just putting their personal business or even worse other people's business out in the street.

On this wonderful day, a few days ago, I was in an elevator alone on the first floor of a building and I heard someone racing to the catch it, so I held the door. Come to find out a few seconds later, it was a nice woman who entered the train nothing short of malodorous to say the very least. I immediately began to feel a little uncomfortable with the stench and then she looked at me and started to speak. As I thought to myself, many questions came to mind. Is she a homeless woman? Is she on her way to take a shower? Had she been working all day in some strange warehouse somewhere? Had anyone else gotten a sniff of this body musk? I was completely consumed with this odor and I knew that she had to be getting off soon. Actually, I realized that I could possibly get off before her.

Then it happened. She said, " Excuse me, I do not mean you any harm at all. I just wanted to bless you and tell you what a handsome man you are and that you look very nice." I thanked her and asked what was her name and she told me hers. Maybe 5 seconds later, it was her floor and she exited the train. I was then alone in the elevator again and instead of thinking about the stench that was still permeating the elevator from top to bottom, all I could think about was how nice it was that she reached out to me in such a kind fashion. Her outer core dress and her body odor had nothing to do with her heart. In that moment I vowed to be even more compassionate than I already am to strangers just because of that interaction. I wonder if she even knew that she gave me such a profound lesson. Imagine that, magic found in a 2 minute elevator ride. What a divine life it is....