In Search Of Balance 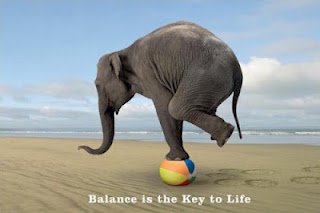 I can truly say that in the past few months I have had more conversations with some of my dearest friends old and new about their frustrations in not being able to find balance. Of course, each person has a different meaning for that word. How do you know that you are in balance? Is there a little glass level with a water bubble on the side of your head that lets you know? Do you hear a little bell go off inside of your ear? Does your eye twitch? I would probably guess no for each and every one of those scenarios.

Balance seems quite elusive to a large majority of people. I do pay attention to it on a daily or maybe weekly basis and I can say from my perspective that balance is in direct proportion with your expectations of yourself. In other words, being out of balance as it relates to what you think others expect from you does not count. Have you ever heard someone say that they wanted to do something but they didn't want to be seen a certain way, so they decided not to do it? I have been there, yet I see that differently now. There is one thing that I know for sure, when we are in balance with our own vision of who we want to be all the cards begin to fall in line.

This posting was inspired by one of my favorite people. This person will remain anonymous. I spoke with them recently and they flat out told me that they realized how there will never be a time when they are completely in balance. They will always be a passenger on the S.S. Ebb And Flow. I of course took some writer's creative license to augment that point in my own way, but you get the picture. I feel the exact same way as it relates to my life. I mean how would we enjoy a sunny day to its fullest if we never had a rainy cold day?How could we truly enjoy some pure filtered water if we had never tasted some questionable tap water at some point?

My definition of balance is when your heart, soul, and body are almost running neck and neck for the longest period of time in a row. I do not believe that is a destination, I believe that it is a frame of mind that becomes a lifestyle. Those that I have seen or known that seem to be in balance are so committed to it that it almost seems as though they were just born that way. Now we all know that we were born in complete balance right? So what happens that pulls us away from that state so consistently? I can only take an educated stab at the answer, we are influenced by strong outside forces. We eat the bait, in other words. It looks so good to release our stress onto another person. It seems so freeing to ignore or punish another person for what we are responsible for in reality. It feels so freeing to not take responsibility at times, but its a trap.

I will use the example of a seesaw in the park. If two children get on it and one is heavier, how can the two balance in the middle. In theory they cannot, however, the lighter child can be so happy that he or she is high up in the air and that can bring them the balance that they need in that moment. Whereas the heavier child can be happy knowing that he or she has the power to lift someone up that high with the sheer power of their body. Balance has many definitions. There is a thing called a balanced daily food intake. I would bet that a mere 10 people could be randomly picked to test this out by eating exactly what was given to them, and at the end they would not all feel balanced in their stomach.

As crazy as it seems, I get my balance from the consistent imbalance that is present in my life. That is not meant in a bad way, it just means that I am happiest when I allow my mind to explore many possibilities instead of a set regimented outcome. Balance or moderation can be tricky as well. For some it could mean never rocking the boat and going in another direction. When in actuality, staying in balance means that we are adjusting all of the time to keep things goings in the right direction. I read that the space shuttle is off course almost 75 to 85 percent on its way to its destination. The entire time its working to stay on the course and balance or negotiate the route. Sounds a lot like our lives doesn't it?

This little acronym came into my head as I wrote this post:

That's my story and I am definitely sticking to it... Magic prevails again.