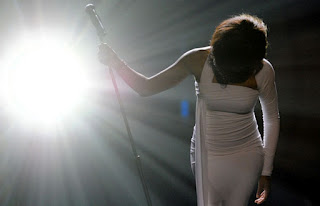 Today was the funeral of Whitney Houston in Newark, New Jersey. I watched it on television in silence.There were probably more celebrities and people of note there than at the Grammys, truth be told. There were so many people who expressed so much appreciation for this woman that it was almost unreal. I say that with much respect of course. Each one of them had something to say that was equally as important in their own way and it was clear that this one woman had made a difference in all of their lives. One of the speakers said something that is so important in my opinion. He said that instead of just buying a ticket, cd, or shirt by your favorite artist or what have you, remember to support them with your thoughts of positivity and well wishing. He made it clear that Whitney did all of the things that she did from traveling all over the world, to signings, interviews, charity events, and so forth for all of us.

Kevin Costner had some of the best things to say about Whitney and he was very entertaining as he did it. This man is a huge movie star, yet he was able spotlight her in a way that will be talked about for quite some time to come. He explained how he knew that Whitney's first movie role was such a perfect fit for her that he believed in it more than she did at the time. She was afraid and thought that she would not be good enough. Imagine that, Whitney thought that she might not have been good enough?!As he told the story, he convinced the movie execs to wait an entire year until she was finished touring so that they could use her. Kevin also said that there were many talented actors that could have played his role, but only very few if any, that could fill Whitney's shoes. That was a powerful statement to me.

In the end, we really do not know how what we do truly touches another until one of us leaves this earth. I say that because it is not as common for us to speak words of appreciation for others as it is for us to ridicule and criticize them. When was the last time you called one of your friends just to see if they were doing well and to let them know how much you appreciate them? You are not a bad person if you have not done this lately, however, think about how good it would make them feel and how much stronger the bond between you and several other people would be if you made that a habit.

Whitney had a rocky second half of her life in a few different ways. She ran into some walls that did not let her pass as well as some influences that caused her to neglect her talents. This can happen to anyone if they are around the wrong examples for too long. None of us actually know what it is like to be celebrated all over the world to that level and how we would personally deal with it. Superstars are human beings that have more money than they will ever need and more popularity than is possible to manage most times. So how can we place them on a pedestal, when on the inside they are just like us? Whitney was a truly gifted songstress, however, it was her time to go. She did not take any material things with her, yet what was most valuable to her, she left with us to enjoy forever. That is worth more than anything you can measure.

I have never in my entire life, sat in front of the television and watched an almost 4 hour funeral. I can honestly say that it went by like it was one hour. It moved me and it made me think more not only about my path as a singer/songwriter, but as a human being that is making his mark here on earth. Every step, every comment, every gesture, every meeting, every compliment, every difficulty, every personality clash, and so forth, will be remembered by someone. Whitney left her mark on the world. She was not perfect, however, she changed the game just enough so that those that follow her will have to notice her path before attempting to forge ahead of it. Farewell Whitney. We will all make sure that you are not forgotten....