Before I tell you a very nice story about an incredible soul that I met today, I want to give immeasurable thanks to Martin Luther King. This was a man that truly changed the course of many people's lives and I cannot say enough about him. If you did not see the posting that I sent out last year almost on this exact day, please go back in the archives and read it, you will not be disappointed, I assure you. I actually would like to share this quote with you from the man himself in honor of his greatness.

"Ultimately a genuine leader is not a searcher for consensus, but a molder of consensus." -MLK

This day has already been filled with magic because of a gorgeous and high vibrating soul that crossed my path today while I was at my neighborhood food coop. I will just call her J.S. for the time being because I want to reveal her at a later date so I can introduce you to her original music. She is an aspiring singer/songwriter who is on the path to manifesting all of her dreams through music. We spoke and I made sure that I really gave her the attention that she deserves as she described what made her most passionate and emotional, it was undoubtedly her music. As we spoke about what each of us did, she told me that her good friend did exactly what I did and then she told me the company her friend worked for as well. It just so happens that I have sung with her friend and I even had a picture in my phone of her and I at a gig together. It is truly a small world.

As we continued speaking about artists that we love and the process in general of being an artist, her eyes began to glow with happiness and it touched me. You know when that feeling arises and you realize that you are in sync with another human being either because of your shared feelings or just because the subject matter just resonates with you so very much. We spoke about artists like "Sting", and "Bjork", and "Tori Amos", and so forth. I did notice however, that when we spoke of Sting and a particular song that he had written called "Fields Of Gold", she began to well up and cry with a smile on her face. This was just so amazingly serene and soothing to receive from her that I was left speechless. I still am not all the way certain why she shed those tears, I just know that something affected her and I was there to witness it.

In the next 30 minutes or so, she spoke of how she wanted to truly create music that was about her life experiences and not just the regular every day formula songs that seek to make the buyers happy and to make loads of money. I connect with this school of thought so very much and I made it clear to her that I would support her efforts in any way that I could. Then she brought up another name of one of her friends and wouldn't you know it, I knew him too! We have all heard of six degrees of separation right? That statement is just so real that it continues to baffle me every week. So we exchanged emails and phone numbers and I offered to lend her my book that was written by Sting because she expressed interest in reading it. She in turn made me aware of a man who she is very inspired by and I will do some research on him.

In closing, she told me that I was truly inspiring her to do more of what she really wants to do and that was just an incredible thing to hear. She just so happens to be from South Africa, by the way. If there is one thing that has always been consistent as I have traveled around the world, it is that people from that part of the world truly vibrate at such a high level. I am not exactly sure why, they just smile and open up and flicker from the inside out constantly. I can think of another woman who is also from South Africa who is exactly the same way that I respect, cherish, and connect with equally as well. One thing is for sure, she came to me today with a story to tell and a willingness to just be her authentic self. It was beyond enjoyable. The magic that she transferred to me was triple intense. Did she need someone to lift her up? Was I that person? Did I need someone to lift me up? Was she that person? These are the things that make you go hmmmmmmnnnnnnnnn............

As I was walking home, I saw the object that you see below. It stopped me in my tracks. I had to show it to you all. Does this describe your life? 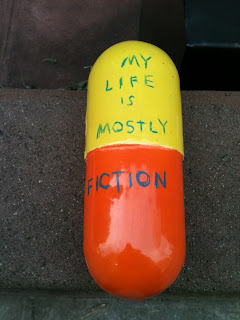 I am off to my 16th day of yoga in a row and I am becoming more and more open to all that lies ahead for me and all of those that are in my general vicinity. What a life, what a city, what a journey!!! Step it up and begin today!! Wishing you forward motion as always.....