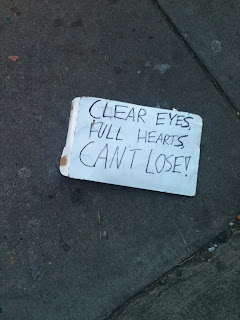 Yesterday was probably the most challenging day of yoga of this entire challenge. The room was so hot and juicy that my muscles were just begging to be exposed to some cool air. The class was ninety minutes and it felt like 180! I took the last class of the day which I normally do not do. The class is still amazing later in the day, its just that I prefer the feeling the practice gives you in the actual morning through to the end of the day. I made it through as I do each and every class with my will power and consistent light breath. This practice is really a challenge in every way.

Class was full for the most part today. I saw most of the same faces that I normally do and that made me happy. I have noticed that certain people are now saying hello to me by first name. I have never introduced myself to them, however, we send each other energy during every class. I also should add that my name is on my yoga mat, so that could be a factor. So the class began with a short and powerful meditation and then we started the sequence of asanas. I felt strong and my poses were going really well. We were almost finished with what is called the balancing series and then, BAM!!!!!! A nice woman from the other side of the room passed out momentarily right in the middle of class. Everyone stopped and turned to focus on her. The teacher held her up seated and rubbed her head and began speaking to her and in a few seconds she was back. We all took a pause and gave her the time that she needed to recover and then the teacher wrapped a towel around her and told her to just be still for the rest of the class.

This was such a magic moment in my opinion because we all directed our good energy towards her and the practice was no longer about us, it was about making sure that she was calm and that she could move forward. We continued on and at one point she told the teacher out loud that she was doing all of the poses in her head still and that she was doing amazing! We all got a kick out of that and I could feel the energy wrapping around her from each an every yogi. I spoke with her after class and asked her if she felt better and urged her to eat fruits, and drink lots of liquids and rest when she left. So many people touched her on the back on their way out.

I decided to walk home from yoga. This is about a 2 mile or so walk, but after yoga you feel as though you can lift the world! I walked a different way back just to see what would happen and I ran into the sign that you see above on the ground. It was so random and yet so perfect based on what had just happened. Who left that there and why? I just had to reach for the iphone and share it with all of you. This whole post is just another example of the fact that what you do, say, think, or create inside can and most likely will affect others. If I had not gone to class today, there would have been one less person to support that girl when she fell. As the saying goes, each and every one of us truly needs all of us. So how many of you want to do a 30 day yoga challenge? Let me know....Chase
Email Post
Labels: affecting others asanas balancing challenge energy transfer Meditation people needing others yoga