She Sent Him A Signal 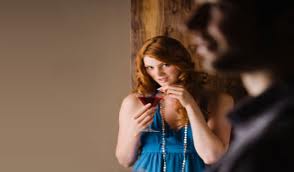 Today was my once a month shift day at an amazing coop that has the best things that anyone could want to eat and more. I see many of the same people there when I do my shift, however, the past two times I have been doing shifts for another member. That atmosphere there is so interesting each and every time. Today was quiet due to the holidays, yet there was an energy nonetheless.

I worked with one of my favorite people there for the biggest part of my two hour and 45 minute shift. I love to watch how people interact with each other in this kind of situation. Less than 20 people in the building actually work there as a regular job, the rest are just volunteer members. For giving your time, you are able to buy the freshest, local, produce and countless other things as well. It is really so much fun!

So as I was lifting juice containers and handing them off to another guy, I noticed a woman walking up near me on my right side. Firstly, she was focused on my friend. She had to ask him something and her face was glowing with bliss at the same time. Immediately, I felt that she wanted to be closer to him. I had never seen her before personally, however, she was sending him a message. As she walked away, he smiled and I knew that there was an exchange of sorts.

A few minutes later, I asked him if he knew that girl or if it was the first time that he was speaking to her? His answer was that she always seemed to be so nice to him and that he thinks that she likes him. He was flustered and blood was rushing to his face. I let him know that he had somewhat of a happy cloud around him we she walked up as well. I told him that maybe he should ask her to talk outside of the place or something. He said that he was a coward and that he normally does not do that. It was such a great position to be in though from where I was standing. It was like watching an electrical current move from left to right continually between two poles.

This was a magic moment for me because being the third party has its benefits too! Whenever we are on the outside of this sort of scene, we get to see what the transfer of like, love, or even a basic positive connection looks like and it feels great. When I spoke to him about it, he blushed a little, but I think that even me noticing it made him feel a little bit happy inside or slightly embarrassed even, but it was positive either way. Wherever you look, there it is! Energy transfer is just divine.


Chase
Email Post
Labels: being engaged with others energy transfer feeling the vibes making a connection noticing others passing energy around sending energy out soul connection