New York "Is" A Broadway Show 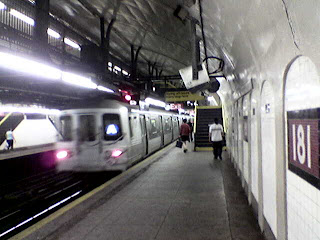 If you have never heard me speak of NY, you can be sure that I am a huge fan of it in many ways. The things that happen here just cannot be explained or understood by the common or rational mind. You will encounter things on this island that will challenge the sharpest mind and frazzle the most innocent one.
I truly do not even know where to begin.Let's start out with the subway system. For two dollars and fifty cents, you can travel the length of the entire city. While you are enjoying your magical underground journey(which will take you above ground at times), you will inevitably be entertained by one or several people. I say several people because the entertainment includes the actual subway riders.
Yesterday while riding the subway, I had the pleasure of being in the same train as a family who passed around an extremely aromatic plastic container of Indian food. Let's just say that just by opening my mouth slightly, I felt that I was at an all you can eat buffet in the east village. They were happy and dressed in the traditional way, so what did I care right? I enjoyed it. About a minute later, I heard water flowing like a small fountain that you would walk by in a park. Being on a train at that moment, it was peculiar to have heard this.So I looked to the left at the end of the train and there he was. A guy decided that he would not wait for the next opportunity to use the restroom, he would just let us all enjoy it right then and there.He was not shy at all, he stayed seated with his eyes closed and like a fountain in the park he released what he not longer needed. So what was magic about this vile happening? I would have to say the reaction of those around him.
New Yorkers have rhino skin. The things that manage to tap on our retinas daily are just too good to be true! This little mini freak show made 6 people move further down on the train, however, the Indian family stayed in place! They missed the actual show and just decided to try and figure out why everyone had moved so quickly! It was pure entertainment, truly. The others just laughed and stared and held there noses and so forth.
In one week I have seen, 5 musical acts, 1 live urination trick, about 8 supposedly homeless people asking for money, 2 marital tiffs, 3 illegal entries into the subway, and even a pick pocket attempt. So I ask you, is this entertainment or what? I just wonder what is stopping someone from creating a reality show from this? It could not get realer than this!
Keep you eyes open and remain curious. There is a lot of life in front of you and if you blink, you might miss it !!

I love it because norms just don't seem to exist in New York. You can behave what ever way you want.

I was sitting in the subway and I guy came in wearing half of a santa clause outfit saying merry Christmas to ever single passenger who hopped on board...it was July.
June 27, 2011 at 8:27 PM

Chase Steele Greye said…
You are so right Chris. I mean who would have thought that there existed a place where the norm was the abnormal...I love it!!
Thank you for your comment brother...
Chase
July 6, 2011 at 12:35 AM