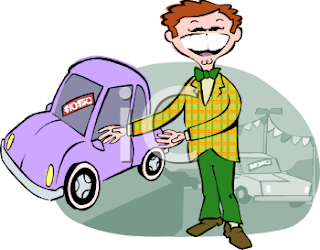 There I was in his place of business watching him do what he does for a living. I let him take the ball and run with it because that was my function today. He wasted no time stating the facts and revealing all of the details. I listened to every word that he said and felt well informed on all of the finer points. This was a delicate dance because throughout the entire time, I felt as though he had rehearsed this countless times prior to my arrival. In my opinion, he was not even conscious of the words that were shooting out of his mouth rapidly like a round of bullets from a machine gun.

It is more than fascinating to be in someone's space that has no idea who you are or what your intentions are. This man was very good at what he does, however, I did not feel that he was authentic in his approach. As I mature, it seems that I can recognize realness in a clearer fashion and it just keeps getting better all the time. I was there to buy a product, or at least seem as though I was. My good salesman friend came at me with guns blazing, yet, somehow, someway, I did not feel entirely comfortable.

When it came time to talk about the dead presidents, the tension to close me thickened and I knew that I was in for some smooth well rehearsed techniques on his part. So I sat back and relaxed so that he could let his game flow. He even brought in another person, just to sweeten the deal. I declined as I was instructed to do prior to the whole situation. I left the showroom unscathed and full of valuable information that I would manually type into my mac for the company who hired me.

I gave him some wonderful comments and was sure to mention how well versed he was on my vehicle of choice. The point of this whole production was to reveal how he engaged me and how well he rendered all of the pertinent information. The one piece of information that was most crucial for me to leave with, he was most uncomfortable giving to me. I watched him twitch and dodge my questions because he could see that I had done my homework. I know he breathed a sigh of relief when I walked away because probably 8 out of 10 people would not have placed so much importance on it. Little did he know, that was just about the main focus.

I wish him well, in his profession. I sincerely went in with the mindset that I would do anything to give him a report laced with flying colors. My mystery shop took place in a car dealership today and because I agreed to be the bridge between two people that I do not know at all, some very valuable information was captured. No where on the page did it ask me how authentic he was or how much I thought he loved his job. Because of this, it would have been unfair for me to comment on that.

My name will not be on the evaluation, however, I wonder if he will remember me just based on the answers in it? Will he know that I felt his technique? Will he know that I felt just a tad bit gamed? If you worked in a place that only paid you for results, would your integrity take a direct hit or would your integrity cause you to rise up? Authenticity is always felt, yet not always properly offered. Does it matter? Yes, yes, yes it does. You never know who is watching do you?