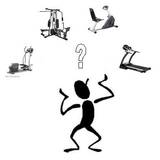 This posting is a bit of a test. The words in the title are there for a reason. Let's start with a story.

There was an experiment that was done quite some time ago. They placed a dog in a cage and closed it. Right away they sent a shock to the right side of the cage and the dog moved to the left. Then they sent a shock to the left side and the dog moved to the right. They repeated this for about 30 minutes and the dog kept moving from side to side on cue. He moved without a moment of pause each and every time. Then something interesting happened, they shocked both sides at the same time and the dog stayed in the middle and urinated on himself. Stick with me.

The second story comes from the military. There was a Captain who lined up his men who were all new recruits and his mission was to get at least one of them to quit as soon as possible. He ran them, he biked them, he pushed their bodies to the limit on the first day.  Throughout the day, he kept repeating to them that they could leave and go home at any time. All they needed to do was to go over and ring the bell. He wanted nothing more than to have just one man quit so that he could make an example of him. He kept on and on insisting that anyone one of them could leave right now and go and get a hot meal and a shower and relax at home. Then it happened!!! The moment that he had been waiting for, one man got up and rang the bell. The Captain granted his wish and he was on his way. When he left the grounds, the Captain was quick to let each man know that the recruit was D.O.R , Dropped On Request.

Let these stories settle a bit. By the way, what did you feel inside when you read the title of this post? Did you have any idea what language it was written in? Did you read the post and just forget about it? Did you get stuck there and not read the post? Do you know what the words mean now? I am curious. Please comment below...