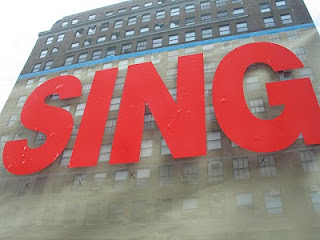 I make my living primarily as a singer. It is rewarding in so many ways, however, I am constantly being tested by the universe to see how bad I want this lifestyle in every way. Most people see the perks of being a singer and they miss out on the actual behind the scenes work that is endless and very challenging to deal with on most days. I say this to say that today was challenging for me in a few different ways. I feel that it is my absolute responsibility to all of you to relay these messages that I received from today's incredible journey.
For starters, I arrived at an audition today at around 8:00 am. I can tell you that it was colder than cold. You know the kind of cold that makes your toes rethink walking too fast at any given moment. I mean the kind of cold that just about makes your whole body shiver and seek warmth like a drug addict who needs a fix. I entered the line and joined at least 200 other people who had arrived before me. This kind if turnout is commonplace for national television auditions, so I was really not surprised at all. I waited for my good friend to arrive that was accompanying me on his guitar and he arrived at about 9:15 or so. The line moved very slow for the next two to three hours, which was very unnerving. I knew from that point that I was being tested.
Being with so many people in such a colossal line has its perks though. Firstly, you are with several like-minded performers who share the same goals. Secondly, I always tell myself that they will only choose who they feel fits the part, not who actually looks the best or can sing the best. This whole game is so situational in every way. People were freezing out there in a big way!! Some people even went into some of the local galleries just to get warm and check out the art at the same time. I love to people watch as well as study how people deal with moments of challenge such as this. You can really learn so much from these and use them in your own life.
Upon entering the building, I was concentrated on getting my feeling back in my hands and feet so I kept moving my toes even though we were now inside. That was great, yet a line just as long as the outside one was inside waiting for us.So now we had to stay calm, positive, and present. More papers were exchanged that pertained to the show and all seems to be well. There was even a guy that bought like 7 pizza pies and shared them will everyone, just as a good gesture. That was very nice of him and he didn't want any money for it.
So after about 2 hours, we were called into the room. Now I felt confident in my abilities about the performance that I was about to render, however, The vast majority of the people there were seemingly not prepared. Each person sang for less that a minute. They were all dismissed promptly. Myself and my good friend Mike were called up to the stage. We did a medley of 3 songs and as we finished one of the judges asked me to sing one of the songs without the guitar accompaniment. I did it without flinching and I loved the challenge. However, he obviously was not feeling it at all. So the other judge told me that he enjoyed the performance, yet it was not quite at the level that they need and that was that. We walked out politely, and that was the end of the exchange.
My lessons here were many to say the least. I knew that I could not let these 2 men steer me from my path. I also believe with all of my soul that you can never let another person's opinion of you become your reality. So after having a 2.8 second battle with my ego, I brushed it off and proceeded to higher mental ground.
I am a work in progress and this day was progress at work. I am mentally and physically depleted, however, I did see the magic in this day. Thank you for taking the time out to be here...
Email Post
Labels: auditions moments of challenge performers resilience responsibility singers